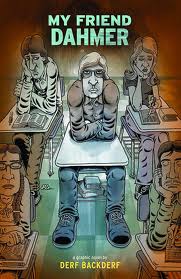 It’s something of a cliché for a reviewer to warn readers of an especially challenging work that “This is not for everyone;” but sometimes—like now—it’s absolutely necessary. Of all the books I’ve read in the last year, John “Derf” Backderf’s graphic-novel memoir My Friend Dahmer is emphatically at the top of my Not For Everyone list. Two months after reading it for the first time I still can’t shake its words and images.

My Friend Dahmer is Derf’s unsettling memoir of the high school years he shared in 1970s suburban Ohio with future serial killer Jeffrey Dahmer. He tells the story with a blend of his own reminiscences, recreations of others’ narratives of Dahmer’s childhood, and reflections on what it must have been like in the bleak, suffocating, increasingly sick world of Dahmer’s mind.

The title is not quite accurate; Dahmer spent a lot of time with Derf and his small, close-knit circle of “band nerds and advanced-placement brains,” but he was never a real friend. In the crowded, chaotic halls, it was several months before Derf even noticed his new classmate: “For most kids, [high school] was an opportunity to make new friends by the bushel. Several of the guys I met during this time would be lifelong pals. Dahmer didn’t make new friends. As far as I could tell…he didn’t have any friends, period. He was the loneliest kid I’d ever met.”

Dahmer eventually gained a scrap of social capital through a singular, appalling gambit: over-the-top but cruelly accurate imitations of epileptic seizures. In class, at lunch, in the library, anywhere guaranteed to get whoops of laughter out of the other kids and a horrified rise out of an adult. Agape at his fearless weirdness, Derf and his friends formed a Dahmer fan club, drew Dahmer cartoons, and one year sneaked him into in every single student club yearbook photo.

As high school went on, Derf’s life came to resemble something out of an edgy but essentially light-hearted teen comedy: close friends, clueless but loving parents, cruising around with a carload of buddies, a giddy rush toward the glory of graduation. (“I practically floated home that day. I felt as if my whole life was stretched out before me, like a highway into the distance, full of hope and possibility.”)

In a quiet neighborhood just a couple of miles away, that golden teen comedy had a shadow story. On a similar suburban sitcom set, with similar props and almost the same supporting cast, Dahmer’s life was a horror story, one in which he himself was becoming the monster.

Throughout, all the way from that first glimpse of “the loneliest kid I’d ever met” to the day a few weeks after graduation when the sunlit and shadow stories splintered apart once and for all, Derf performs an extraordinarily difficult balancing act. He is never less than thoroughly repulsed by Dahmer’s monstrous acts and monstrous evil, but also willing to fully imagine the pitch-black wretchedness of being the teen who would become that evil, never able to escape it because you are it. The art is perfectly matched to the story(ies) Derf tells: heavily lined, stiff, blocky, harshly expressive, as starkly black-and-white as a series of woodcuts. It mostly uses the familiar 4-6 panels per page comics structure, but finds endless variations within that structure, each page both compellingly written and arrestingly composed.

My Friend Dahmer is decidedly not for everyone – but for anyone who can accept it on its own terms, it is a vivid experience, compelling and horrifying and breathtakingly unlike anything else out there.

Jacqueline Smay holds a BA in English, with a concentration in creative writing, from Vassar College. She has been proofreader and editor of Lost In The Grooves, Scram's Capricious Guide to the Music You Missed and Swordfishtrombones of the 33 ½ series. She is acquisitions editor for Plus One Press, San Francisco, where she has worked as editor on the JP Kinkaid mystery series, the latest Sarah Tolerance novel, and on piano... Nicky Hopkins! The Extraordinary Life of Rock's Greatest Session Man, and Sam the Bat. Her writing is included in Scram's Capricious Guide to the Music You Missed. Out of economic necessity she also does database management and scientific MS copyediting at UCSF. She lives in San Francisco with her husband and two children.
More from this reviewer
PrevThe Herring in the Library
Crouching Tiger and dragons, too.Next