Home » Reviews » Mystery » The Herring in the Library

The Herring in the Library 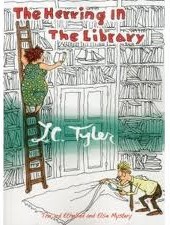 May the suggestion to read L. C. Tyler’s The Herring in The Library be the jolliest gift you receive this holiday. Tired of trimming the tree, hanging the garlands, or watching “It’s a Wonderful Life” for the umpteenth time? Run, don’t walk, to your favorite bookstore, library or online store, and buy, borrow or download The Herring in The Library.

If you’re not already a fan of L. C. Tyler, here’s a bit of background: He’s a Brit, he’s a funny man, and he writes very comic mysteries. That’s enough for now and enough for me after reading #3 in his Elsie and Ethelred series to recommend it. All four, and soon five books in this series, have the word herring in their titles. Yes, as in “red herring.” Tyler is funny and blessedly not terribly subtle, which only adds to the pleasure.

Ethelred is a crime writer and Elsie is his agent. They go back a long way. Ethelred has been invited to dine with an old college chum, now part of the landed and titled aristocracy. Elsie accompanies Ethelred to the manor house, which is necessarily large, with many rooms. There is a library, a billiard room, a kitchen, and about now you may feel like you are in familiar territory. No, this isn’t a Clue mystery book, but Tyler does have a bit of fun suggesting a game in a book. In England the game is called Cluedo and before you wonder why they just didn’t use the word Clue, remember that the game was invented by a Brit (to distract himself and his wife while waiting for the all-clear siren during the Blitz), and Cluedo, a portmanteau of “clue” and “Ludo,” Latin for “I play,” is the original name and Clue is just the colonial upstart.

Between dinner and dessert, the lord of the manor dies and the mystery ensues: which of the invited guests may have caused his death (it appears at first to be suicide), but might it not have been the money-grubbing wife, the cook, or the gardener? What carries the narrative with humor and intelligence is the sleuthing on the part of Elsie and Ethelred. Tyler makes it easy for the reader to differentiate between the two not just through their voices, but visually, with Ethelred’s take on the matter told in Times New Roman font and Elsie’s in what looks to be Cambria. Elsie may be Ethelred’s comrade in arms when it comes to keeping him in print, but she is his nemesis when sorting through the clues.

In addition to writing a game inside his mystery, Tyler lets the reader see the first chapters of Ehthelred’s next Master Thomas mystery which takes place in Chaucerean times and is set apart in italics to lessen any confusion on the part of the reader. Deadlines and confusion abound in this smart and totally fun mystery. You can look to the publisher, Felony & Mayhem, for more of the same, but don’t wait until next Christmas.

Sunny Solomon holds an MA in English/Creative Writing, San Francisco State University. She is a book reviewer for “The Clayton Pioneer” and her poetry and other writing has been published in literary journals, one chapbook, In the Company of Hope and the collection, Six Poets Sixty-six Poems. She was the happy manager of Bonanza Books, Clayton, CA and Clayton Books, Clayton, CA. She continues to moderate a thriving book club that survived the closure of the store from which it began. Sunny currently lives next to the Truckee in Reno, NV.
More from this reviewer
PrevStars
My Friend DahmerNext