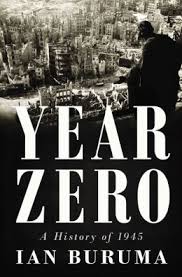 In American culture, an enduring image of the end of World War II is “The Kiss,” a photograph of an American sailor exuberantly kissing a young woman in Times Square on August 14, 1945, V-J Day. For Ian Buruma, in Year Zero, some contrasting images are furnished by a Roberto Rossellini film, Germany, Year Zero, a 1948 docudrama using real footage. The movie captures the devastation in Berlin and the desperation of its remaining citizens nearly three years after the war’s end. Buruma borrowed and re-worked Rossellini’s title while enlarging his field of focus to include large swaths of the world.

Buruma has written more than twenty books, mostly about Asian society. His intellectual breadth justifies his label as a “public intellectual.” Foreign Policy magazine placed him among the top 100 global thinkers in 2010. That is the strength of this book, although it’s not lengthy and makes no claim to being an exhaustive, footnote-laden scholarly tome. It does reflect Buruma’s wide reading, and there are some footnotes, but Year Zero is really a long well-written essay for the general reader, one that challenges our assumptions. While it concentrates on 1945, it includes events and perspectives dating from before 1945 and going forward to the present day. Do wars ever end?

Buruma’s inspiration for this book was drawn from his father’s war-time experiences. A Dutch citizen and law student, his father was Shanghaied by the Germans in 1943 and sent to Germany to work in a factory making rail car brakes. His road home after the war’s end was indirect and traumatic. Buruma engagingly weaves his father’s experience into the wider pattern experienced by millions of people.

To organize the experiences of these myriads of people, Buruma has identified three broad themes in Year Zero: “Liberation Complex,” “Clearing the Rubble” and “Never Again.” “Liberation Complex,” has chapters entitled “Exultation,” “ Hunger,” and “Revenge.” “ Exultation,” while real, was not long-lasting in most parts of the war-ravaged world and was soon supplanted by more pressing needs—food and housing. Although Americans may have stopped shooting in Europe on May 8, 1945, and in Asia on August 14, 1945, for others, blood and tears continued to flow for months and even years.

The subject of hunger only intensified as the summer of 1945 turned into the winter of 1946 and food production lurched downwards. Aid agencies geared up slowly. Following Japan’s surrender, a frustrated, General MacArthur (Supreme Commander) wrote to his superiors in Washington, “send me food or send me bullets.” The average Japanese ration throughout most of 1945 was less than 1,000 calories per day. Social revolution was a possibility. Food arrived, not bullets.

Throughout Year Zero, not just in the chapter “Revenge,” Buruma traces the very human impulse to learn about and to punish past wrongs. The Holocaust rightly stands as the exemplar of the war’s “ethnic cleansing,” and while it’s the largest of such human tragedies, “ethnic cleansing” continued in other forms. Many Jews remaining in Poland were forced to flee to other countries. Indigenous Poles in Ukraine and Belarus were forced to leave the USSR. Germans in Poland and Czechoslovakia, who had lived there for hundreds of years, fled under duress to Germany. At least 500,000 died on the way. All over central and eastern Europe, millions of ethnic people found themselves disastrously defined as “other.” Dispossessed of their lands, jobs, and savings, they found themselves on the road to somewhere else. The era of “ethnic cleansing” was upon us without having words to describe it. Seventy years later, we are depressingly familiar with this ugly euphemism and its numerous brutalities. Ian Buruma’s intelligent and compassionate Year Zero, a History of 1945 helps us understand some of its historical roots.          – Neal Ferguson

Also available by Buruma: Taming the Gods: Religion and Democracy on Three Continents;  Murder in Amsterdam: Liberal Europe, Islam, and the Limits of tolerance; The China Lover (novel); The West in the Eyes of its Enemies (with Avishal Margalit); Inventing Japan 1853 to 1964; Wages of Guilt, Memories of War in Germany and Japan; Behind the Mask; The Japanese Tattoo; Anglomania, A European Love Affair; Japanese Mirror; The Missionary and the Libertine; God’s Dust, A Modern Asian Journey; Bad Elements, Chinese Rebels from Los Angeles to Beijing; Playing the Game.

Neal Ferguson is a self described Anglo-phile. After studying for a PhD in British history and doing research for a year in various British archives, he came to the University of Nevada in 1970 to teach. Soon he found himself in administration where he remained until 2003. After returning to full-time teaching a decade ago, he decided to concentrate his teaching energies on Medieval British history and various global aspects of World War II. Dedicated to Ambrose Bierce’s proclamation that the purpose of war is to teach Americans geography, Neal insists that his students accompany him (in class) to sundry east European rivers and steppes, African deserts and jungles, south-east Asian mountain ranges and peninsulas, and small islands and coral reefs in the Pacific. Currently he is writing a book about the ups and downs of General Douglas MacArthur’s military reputation.
More from this reviewer
PrevWild
The Good Lord BirdNext