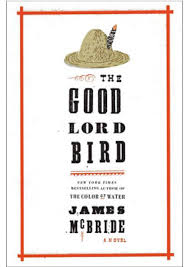 It’s not any wonder that James McBride’s latest book, The Good Lord Bird won the 2013 National Book Award, and I won’t be the last reader to declare that Huck Finn now has a worthy traveling companion in McBride’s narrator, Henry (Onion) Shackleford.

McBride first came to national attention with his memoir, The Color of Water. Working at Bonanza Books, I remember droves of high schoolers ordering the book, which, by then, was required reading. Next came Miracle at St. Anna. I was hooked, so that when Song Yet Sung hit the store, I had already read the advance review copy. It’s been five years and The Good Lord Bird was worth the wait.

If McBride has anything to say about it, John Brown’s body is not “moldering” in his grave. The prologue to The Good Lord Bird tells us of the narrative of a very old black man, recorded in a series of interviews and then secured in a metal box and hidden under the office floorboards of The First United Negro Baptist Church of the Abyssinia. The box and its contents were all that survived when the church was burned to the ground in Wilmington, Delaware in 1966. Got your attention, right? Oh, no, another grim African American tragedy! No, this fire was caused by faulty wiring — the very first indication that the reader is bound for some darkly funny and envelope-pushing storytelling.

The narrator is one Henry Shakleford. His story begins in Kansas when he is freed from bondage, a bondage which until the day John Brown “rescues” him, had afforded him good food, an insufficient, but loving father, and a master, a well above average slaveholder. In an almost burlesque rendering of a free-for-all between John Brown and Henry’s master, Henry’s pa is accidently killed and Brown, in a successful retreat, takes young Henry with him. Henry, “who wore a potato sack like most colored boys did in them days,” being small and light skinned with curly hair, was taken for a girl and nicknamed Onion by John Brown. It is old Shakleford’s narrative of when he was that young colored boy, acting as a girl; the story of his years in the company of Brown and his ragtag gang of abolitionists, from that day in the bloody Kansas Territory of 1856, until another fateful day in 1859 at Harper’s Ferry, West Virginia.

With original insight, a keen sense of humor and a knack for the absurd, McBride opens some long-locked doors to the truth of John Brown. Readers who find themselves laughing out loud may also find their laughter silenced by this truth. Onion becomes Brown’s good luck charm, almost saving him from Harper’s Ferry, but it is a feather, a piece of lightness from a rare bird, that offers more than good luck.

Wonderful biblical misquotes, abandonment by Frederick Douglass, the slow hiving of bees, a financially and emotionally strapped abolitionist movement, and John Brown’s heartfelt and redeeming belief that he was doing the Lord’s work come together, like much of James McBride’s writing, with a rhythm and meter all its own.    – Sunny Solomon

Also available by McBride: The Color of Water; Miracle at St. Anna; Song Yet Sung.

Sunny Solomon holds an MA in English/Creative Writing, San Francisco State University. She is a book reviewer for “The Clayton Pioneer” and her poetry and other writing has been published in literary journals, one chapbook, In the Company of Hope and the collection, Six Poets Sixty-six Poems. She was the happy manager of Bonanza Books, Clayton, CA and Clayton Books, Clayton, CA. She continues to moderate a thriving book club that survived the closure of the store from which it began. Sunny currently lives next to the Truckee in Reno, NV.
More from this reviewer
PrevYear Zero
A Soldier of the Great WarNext