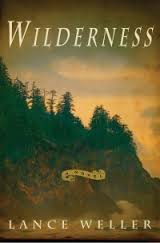 Lance Weller, in his new novel Wilderness, juxtaposes two quite disparate wildernesses together. One is the famous 1864 Wilderness Battle near Spotsylvania, where North and South clashed in one of the bloodiest encounters of the American Civil War. The other is the wilderness of Washington State’s Olympic Peninsula. There, thirty five years after he fought in the 1864 confrontation, Abel Truman has retreated from most human contact. One arm, badly wounded, healed improperly and is nearly useless. Equally damaged is Abel’s mind, for he cannot forget the horrors that he experienced so many years before.

The novel moves back and forth between two pivotal moments in Abel’s life—the horrendous scenes of the battle where he lost so many friends, and the decision he makes in 1899 to abandon his ocean-front shack on the Pacific and head back into the mountains toward the east. As he treks, and as he encounters both adversaries and allies, he recalls the past. His current life is reflected in his memories, and his memories mirror his current life.

A brief Prologue prefaces Wilderness, so the reader intuits the novel’s ending at the outset. The Prologue takes place at yet another remove from the essential action of the book, in a rest home in 1965. An elderly woman remembers meeting Abel when she was a young girl. Her memories not only foreshadow Abel’s tale but they also locate in time and space several other characters who will play key roles in his Olympic Peninsula sojourn. In some respects I appreciated the advance information the Preface conveys, but part of me wished for more mystery, more dramatic tension as the story progresses.

That said, however, there is enormous tension in the graphic violence, the brutality and the bloodshed that occurs on almost every page. Wilderness is not a novel for the faint of heart. It depicts war and the futility of war as well as any narrative I’ve read. It also conveys the ferocity of the western frontier, with men who behave more like animals than the animals themselves. I couldn’t read too many pages of Wilderness at once. Normally I devour a book in a day or two, but this one took me a week to finish. I needed to catch my breath.

But I also wanted to savor the power of Weller’s prose. Despite its bloodshed, or perhaps as a counterpoint to that reality, Wilderness at times is almost poetic. I know the Olympic Peninsula well and, as I read, I could almost taste salt spray in the air, smell the fecundity of the rainforest, hear a wolf’s banshee howl, and feel the “mist leaked from the trees to hang shroud-like” among the evergreens. I’m not familiar with the Civil War locale at all, but I sense that Weller was describing rural nineteenth-century Virginia with similar accuracy and attention to detail. Perhaps that’s what makes his novel so chilling—the immediacy and the eloquence of his prose.

As I write this review, I hope I’m not scaring readers away from Wilderness. Yes, it’s ferociously brutal, and yes, it’s hard to read so much violent specificity. But every single page is well worth reading. And the overarching thesis of the novel—the ultimate generosity of strangers and the salvation that can come when people help each other out—is well worth taking to heart.     – Ann Ronald

Ann Ronald is a retired English professor from the University of Nevada, Reno. Author of dozens of reviews, she’s also written a number of books about the American West. They include literary studies such as The New West of Edward Abby and Reader of the Purple Sage, cultural studies such as GhostWest and Oh, Give Me a Home, and nature writing such as Earthtones: A Nevada Album. Her latest is a work of fiction, Friendly Fallout 1953. Since retiring, she’s been reading vociferously, so “Bookin’ With Sunny” is giving her a wonderful opportunity to share thoughts about her favorite new discoveries.
More from this reviewer
PrevThe Village
Haven’s WakeNext