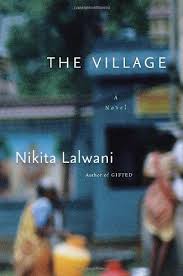 Nikita Lalwani, a contemporary novelist born in India and now residing in London, has written a novel about documentary film-making, its action viewed through a camera lens. Scenes are framed, sometimes by the novelist and sometimes by the eye of the one of three BBC docu-dramatists. Ray, the director of the film, admits that “I am like a camera, with my shutter open.” She, along with her producer and the narrator of their documentary have gone to rural India to produce a program about an experimental prison where murderers and their families live and work together in a village without walls. The village’s record is extraordinary—no inmate has ever reoffended and only one has ever tried to escape.

Into this apparent Utopia, the film-makers intrude. Ray imagines they are trying “to capture some kind of ‘actuality’: some kind of true experience.” They want to indulge in “a perverse curiosity,” to show not only the current living conditions but also the circumstances that have brought the villagers there. As the novel progresses, however, and as she and the others push the villagers to reveal thoughts and deeds better kept secret, Ray acknowledges that the camera changes everything. Not only does the very act of filming alter situations and place people in uncomfortable situations, but Ray, Serena, and Nathan find themselves manipulating the participants so that their film will be more dramatic.

So far I have been describing the surface narrative of Nikita Lalwani’s The Village. Her subtext is equally clear—the BBC film-makers from London are behaving rather like colonizers. Just as the British colonized India in the days of the British Empire, so Ray and her colleagues are exploiting the villagers and their stories. Even though Ray finally admits their culpability, irreparable damage has been done.

Serena, the film’s producer, posits a guiltless point of view. She simply wants to move the villagers into “the present tense.” To her, the past is interesting only as it disrupts the present, only as it brings tension into a scene. Nathan, the narrator, serves merely as onlooker and occasional confidante. It is the two women, Ray and Serena, who distend and distort the action and the scenes. And it is the author who moves the action and those scenes between the tenses. While most of The Village is told in the past tense, occasional interchanges occur in the present. Going back over these shifts, I realize that Lalwani means to signal moments of intensity. She is saying to her readers PAY ATTENTION, not in words but in tone.

After finishing The Village, I found myself rethinking the colonial mind-set, the anthropological urge to excavate the lives of others, the film-maker’s enthusiasm for capturing secrets in a frame. Lalwani wants us to muse about all the ways outsiders invade other people’s space, and somehow reshape it to fit their own beliefs and prejudices. Reading how Ray comes to understand and acknowledge her mistaken views of the village is a lesson for us all. The Village is a thought-provoking novel well worth reading. It turns out that Ray’s shutter may have been open, but her vision was unfortunately closed.     – Ann Ronald

Ann Ronald is a retired English professor from the University of Nevada, Reno. Author of dozens of reviews, she’s also written a number of books about the American West. They include literary studies such as The New West of Edward Abby and Reader of the Purple Sage, cultural studies such as GhostWest and Oh, Give Me a Home, and nature writing such as Earthtones: A Nevada Album. Her latest is a work of fiction, Friendly Fallout 1953. Since retiring, she’s been reading vociferously, so “Bookin’ With Sunny” is giving her a wonderful opportunity to share thoughts about her favorite new discoveries.
More from this reviewer
PrevAtomic Comics
WildernessNext