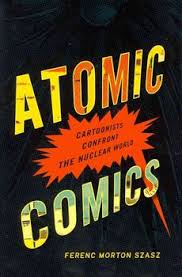 Atomic Comics is the 2013 winner of the ALAs “Choice Outstanding Academic Title” award. I read it in almost one sitting, and if this book is any indication of academic writing, then we’d all be reading nothing but academic titles.

Atomic Comics was written by the late Ferenc Morton Szasz, a Regents Professor of History at the University of New Mexico for forty-three years. Although we’ve been living in the atomic age for more than seventy years, many of us are woefully lacking in any clear understanding of what the atom is all about. Szasz is less interested in educating the reader about the atom than in telling us about the role comic books played in a dedicated effort to bring the atomic age, in both fiction and nonfiction, into the hands of the public – and he does a bang-up job

Szasz grew up with comic books, much to the chagrin of his mother, a high school English teacher. “How could the story of ‘Little Lord Fauntleroy’ (who was a complete prig) match the adventures of Batman, Green Arrow, SubMariner, or Uncle Scrooge and his nephews?” Children weren’t the only readers of comic books: in 1944 Time magazine estimated “that 20% of adults were avid comic book readers and twenty-five million comic books were published monthly.”

In America, and most of the world, the atomic age came to life with President Harry S. Truman’s announcement that the “allies” had dropped a “new type of weapon on the Japanese city of Hiroshima.” The offspring of the Manhattan Project, a closely guarded secret, was a secret no more.

If a picture is worth a thousand words, it is no wonder that comic books, became the means through which the public was introduced to the bomb with all its atomic possibilities. Comic books often were two steps ahead of the times. Superman and other “comic book heroes began fighting Fascism almost two years before the American government.” Even after the war ended in 1945, “The Commander Battle and the Atomic Sub series (1954) arrived on newsstands before the Nautilus, America’s first nuclear submarine, was commissioned.” As early as December 1945, Atomic Man hit the magazine racks, with the superhero’s promise to “dedicate my life to spread happiness throughout the world by means of atomic power.”

The atomic presence in the Cold War era gave birth to a range of comics from the parodies of Mad magazine to spy comics like Spy Hunters. Atomic characters were large, The Hulk, and small, Atomic Bunny. Before the underground comix arrived in the late 1960s, Disney was hiring science consultants to help write Our Friend the Atom (1956).  The reality of life in the atomic age came to fruition with the shattering disasters of Three Mile Island (1979), the explosion of the Challenger (1986) and the second major nuclear facility meltdown in Chernobyl (1986) . The cartoonists were there to keep the public aware, including Dr. Seuss’s anti-nuclear The Butter Battle Book, an example of the “staying power” of graphic-art fiction.

Szasz writes with an atomic power all his own. This is not a big book (163 pages, text and notes), but he takes the history of the comic book all the way from its beginning to the twenty-first century with its atomic events, good and bad. The industry’s eagerness to educate and entertain in all things atomic will leave readers wishing Szasz had written more. The index alone is worth the price of admission. Comic books, the bane of most parents, have a real place in the world of letters. Your kids, if you let them read Professor Szasz’s Atomic Comics, may have the last word, “I told you so!”   – Sunny Solomon

Also available by Ferenc Morton Szasz: The Protestant Clergy in the Great Plains and the Mountain West, 1865-1915; Lincoln and Religion (with Margaret Connell Szasz); The Day The Sun Rose Twice; Abraham Lincoln and Robert Burns, Connected Lives and Legends; The Divided Mind of Protestant America; Great Mysteries of the West; British Scientists and the Manhattan Project; Scots in the North American West.

Sunny Solomon holds an MA in English/Creative Writing, San Francisco State University. She is a book reviewer for “The Clayton Pioneer” and her poetry and other writing has been published in literary journals, one chapbook, In the Company of Hope and the collection, Six Poets Sixty-six Poems. She was the happy manager of Bonanza Books, Clayton, CA and Clayton Books, Clayton, CA. She continues to moderate a thriving book club that survived the closure of the store from which it began. Sunny currently lives next to the Truckee in Reno, NV.
More from this reviewer
PrevBadluck Way
The VillageNext