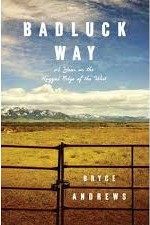 Badluck Way: A Year on the Ragged Edge of the West

Many authors, especially those engaged in contemporary nonfiction nature writing, have dealt with the ragged interface between the Old West and the New. Some are naïve or nostalgic, prosaic or polemical. Few are as thoughtful as Bryce Andrews in Badluck Way: A Year on the Ragged Edge of the West. Andrews describes a year of living on the land in Montana’s Madison River country, where he herded cattle, mended fences, and watched the seasons change. He worked for the Sun Ranch, property pieced together from several smaller ranches and owned by a multimillionaire from Silicon Valley. The Sun Ranch promises to be environmentally friendly, leasing its land for summer cattle grazing, moving the herds frequently and keeping the cows away from the creek beds, offering conservation easements, and sharing the landscape with elk, moose, deer, and their natural predators.

Andrews is no neophyte. Although he grew up in Seattle, he had spent many summers working on an eastern Montana ranch. He relishes the labor and the sense of accomplishment that follows a job well done. Even so, he is unprepared for his feelings when the old confronts the new. The old, in this case, takes the form of wolves. Before Andrews’s time at Sun Ranch, a pack made its way there from Yellowstone, and had to be eliminated. Now a new pack has arrived, and is acquiring a taste for heifers and steers as the summer dwindles. Listening to Andrews mull over his reactions to the wolves is truly instructive, as he finally must come to terms with the need to kill members of the pack. Andrews, too, has an Aldo Leopold moment, but in a more twenty-first century way. Wisely, he doesn’t point out the parallels, or even mention Leopold’s name. He simply foregrounds the wolves’ presence, their increasing appetites for cattle, and the need to eliminate them.

Encroaching wolves, even those reintroduced to the West, are a harbinger of the past. Meanwhile, a ranch such as the Sun is financially unsustainable in the future. A sub-narrative of Badluck Way is the fact that every day the owner is losing money on the operation. On nearby property, subdivisions and mini-ranchettes are creeping into the valley, dotting old pastures with new houses and roads. To keep the Sun Ranch pristine but financially viable as well, the owner chooses a combination of tactics. A fancy guest ranch at a distant end of the property, and individual sales of a few five million dollar, visually-intrusive sections which only the very wealthy can afford.

Andrews, of course, is personally removed from the financial shenanigans, though he is intimately involved with the wolves. Throughout Badluck Way, he muses about the changes and about his own reactions. However, this is not a memoir in the sense that it centers on Bryce Andrews’s feeling. Rather, he serves as a narrative conduit to the land itself, where the focus of the book always holds true. But when that terrain begins to be transformed, Andrews decides not to wait around. “I left the ranch,” he declares, “because I could feel something changing completely and irreversibly, like summer becoming fall.”

Anyone concerned about how the West is mutating in the twenty-first century will find this book well-informed, provocative, and subtle. Andrews shies away from preachy rhetoric and has no obvious agenda. He simply wants to tell a story of irrevocable change.     – Ann Ronald

Ann Ronald is a retired English professor from the University of Nevada, Reno. Author of dozens of reviews, she’s also written a number of books about the American West. They include literary studies such as The New West of Edward Abby and Reader of the Purple Sage, cultural studies such as GhostWest and Oh, Give Me a Home, and nature writing such as Earthtones: A Nevada Album. Her latest is a work of fiction, Friendly Fallout 1953. Since retiring, she’s been reading vociferously, so “Bookin’ With Sunny” is giving her a wonderful opportunity to share thoughts about her favorite new discoveries.
More from this reviewer
PrevThe Shadow Queen
Atomic ComicsNext