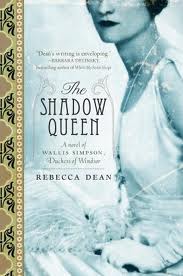 The Shadow Queen: A Novel of Wallis Simpson, Duchess of Windsor

Talk about false advertising!!! I chose to read Rebecca Dean’s novel, The Shadow Queen, because its heroine was an intriguing person. I didn’t know much about Wallis Simpson’s life, and wanted to learn more. Because the subtitle suggested to me that Dean would focus on Simpson as the Duchess of Windsor, I expected to read a story about how she grew to love Prince Edward, heir to the British throne, and/or how their love affair finally caused him to abdicate his royal position. Wrong! Instead, I read a novel about Wallis Simpson’s life up until the exact moment she lights up Prince Edward’s eyes. “Will you dine with me tomorrow night?” asks the soon-to-be lover. “Knowing that tomorrow night was only going to be the first in a lifetime of such nights, her lips curved in a deep, radiant smile. ‘Yes, sir,’ she said. ‘Of course I will.’”

Counter to my expectations, so ended The Shadow Queen. Actually, the four-hundred-plus preceding pages were quite enjoyable. The plot rocketed along, tracing the escapades of a frivolous flirt who was surprisingly smart and absolutely charming. Friends, family, and lovers found themselves captivated by this Baltimore belle. Born into a wealthy family on her father’s side, she was raised with high expectations. Women of her social standing married well and never worried about financial issues. But when her father died suddenly, her widowed mother inherited none of the money. For the rest of the novel, Wallis’s paternal family doled out dollars only in return for total acquiescence to their wishes.

Wallis Simpson was not a woman who easily acquiesced. Most of The Shadow Queen pursued her teen-age and young adult years, when she ran a bit wild and readily experimented with what life might hold. To add to the mix, Dean created a foil, Pamela, who understood Wallis well and appreciated her awkward financial position, but who unfortunately treated her best friend cavalierly. Each episode involving Pamela, and Pamela plays a significant role in the novel, was apparently crafted wholly from Dean’s imagination. So even the historical underpinnings of this historical novel turned somewhat suspect.

So, too, were the interior scenes depicting Wallis’s relationships with her various suitors. Dean went into great detail about Wallis’s interior life and the controversial woman’s sexuality. The end notes explained the rationale for Dean’s extrapolation, but again, I was unprepared for what I found inside The Shadow Queen’s pages. If that last sentence sounds titillating, it was meant to be. In truth, this was a titillating romantic novel, both sexually and psychologically, but it was not a serious novel for any reader who appreciates historical fiction closely aligned with historical fact. The Shadow Queen, like its heroine, was a rollicking romp, totally capricious, not very complex, but fun.     – Ann Ronald

Ann Ronald is a retired English professor from the University of Nevada, Reno. Author of dozens of reviews, she’s also written a number of books about the American West. They include literary studies such as The New West of Edward Abby and Reader of the Purple Sage, cultural studies such as GhostWest and Oh, Give Me a Home, and nature writing such as Earthtones: A Nevada Album. Her latest is a work of fiction, Friendly Fallout 1953. Since retiring, she’s been reading vociferously, so “Bookin’ With Sunny” is giving her a wonderful opportunity to share thoughts about her favorite new discoveries.
More from this reviewer
PrevDrift
Badluck WayNext