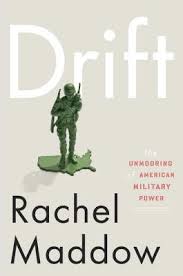 If you enjoy watching “The Rachel Maddow Show” each evening on MSNBC (and I do), you will relish reading Drift. The book sounds as if she were inside your head, chatting away about an aspect of the news, amusing you thoroughly, but at the same time conveying smart, relevant, and provocative information. In the case of Drift, the subtitle spells out the topic—The Unmooring of American Military Power. She wants you to think about how and why our nation has come to its current state of almost perpetual war in the so-called service of peace.

As Maddow makes clear, the founding fathers of the United States wrote a series of democratic hurdles and rejoinders into the Constitution that were intended to prevent ongoing militarism from happening. They argued that American wars should be fought by militias, citizen soldiers not professional soldiers. They believed wars should be finite, not infinite, conducted only when absolutely necessary, and that armies should be reduced in force as soon as an engagement ends. They also insisted that a decision to go to battle should not be invested in a single individual or even in a single branch of government. The notion of unchecked presidential prerogatives to conduct war would have horrified Thomas Jefferson.

Drift explores our nation’s steady slide into its current military mindset. Maddow chose the word “drift” to characterize the apparent indifference of the American people to what has been developing for more than half a century. “Drift” also signifies Congress’s willingness to abdicate its responsibilities for political expediency. At the same time, she points out that those in charge seem not to drift at all. Rather, they have seized increasing power wherever and whenever an opportunity arises. Maddow generalizes about American wars preceding 1960, then examines more thoroughly what has been happening from Viet Nam to the present, from the Bay of Tonkin to Iran-Contra, from Kuwait to Bagdad, from Kosovo to Afghanistan. No party and no president is exempt from her critique. She is as harsh when assessing the ways the Reagan White House manipulated executive privilege as she is when pulling back the curtain of secrecy on Obama’s use of drones.

What I found most unnerving about her narrative is how she traces the growth of outsourcing, the use of private contractors that at first substituted for menial tasks, then became replacements for fighting forces, and now function as perhaps our most important guardians of peace. Her book was published a year before the Edward Snowdon expose, but Drift is prescient in its understanding of the scope of outsourcing and how little oversight controls its excesses. Secrets, imperative in the name of national security, prevail.

Maddow’s conclusion flows naturally from her findings. She writes, “we’ve built ourselves—to the exclusion of all other priorities—a military superstructure we can’t use for anything other than war and that we can no longer afford.” The final pages of Drift offer suggestions we might take to repair the damages done by the “drift” since the 1960s. Conservatives, as well as liberals, should take heed, for her ideas could well be embraced by all of us. Drift is not a strict ideological book. Rather, it is a profoundly disturbing clarion call—well-written, loaded with facts, often witty and wry, but nonetheless disturbing—for rethinking our current inaction. Almost $5 billion dollars a month for military spending during the last ten years, and we never discuss why that’s more important than medical research care or alternative energy development or high-quality education for everyone?   – Ann Ronald

Related video from Rachel Maddow on her book, Drift:

Ann Ronald is a retired English professor from the University of Nevada, Reno. Author of dozens of reviews, she’s also written a number of books about the American West. They include literary studies such as The New West of Edward Abby and Reader of the Purple Sage, cultural studies such as GhostWest and Oh, Give Me a Home, and nature writing such as Earthtones: A Nevada Album. Her latest is a work of fiction, Friendly Fallout 1953. Since retiring, she’s been reading vociferously, so “Bookin’ With Sunny” is giving her a wonderful opportunity to share thoughts about her favorite new discoveries.
More from this reviewer
PrevThe Orphan Master’s Son
The Shadow QueenNext