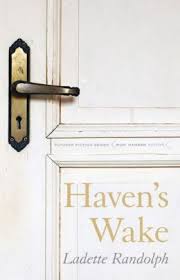 Sometimes the title of a book captures its content perfectly. Such is the case with Haven’s Wake, Ladette Randolph’s novel of modern Mennonite life and death and family secrets. When Haven Grabel, an eighty-five-year-old family patriarch, dies in a tractor accident on his Nebraska farm, his children and grandchildren and in-laws immediately gather around his grieving widow. They mean well but, during the two days preceding Haven’s funeral, an array of old antagonisms are revisited and long-buried grievances come to the surface. Haven’s Wake, of course, refers to those two days, the family vigil that they all must endure. But “wake,” in this case, means more than simply the Grabels’s ritualistic watch. It also implies the aftermath, the consequences, the trail that follows in Haven Grabel’s absence. Without his presence, the present unravels in patterns reminiscent of the past.

Randolph is especially adept at weaving Mennonite beliefs into her story of familial angst. The habit of shunning, of turning away from someone whose behavior or beliefs are unacceptable, plays a key role. So does the habit of never talking about something painful, never discussing tragedy, never confronting issues. Elsa, Haven’s widow, is particularly adroit at ignoring whatever she doesn’t want to acknowledge or admit. Her sons and her grandchildren are equally adroit at reopening old family wounds and laying them bare.

If all this sounds like a sobering reading experience, rest assured it isn’t. Haven’s Wake may offer a realistic narration of grief and uncomfortable family history, but it also pulls together new connections and new ways of understanding. Elsa may be flawed in many ways, but she loves her offspring and she believes in her church. When she is most troubled, she plays hymns on her piano, singing softly to herself or in harmony with others. And when the family relationships are fraying, the sense of community prevails. Friends support friends, family supports family, and those threads hold the story lines together like one of Elsa’s beautiful quilts.

Another wonderful element of this touching novel is Randolph’s sense of the rural Nebraska landscape. Returning readers of “Bookin’ with Sunny” know that I always appreciate a writer who draws scenery well. Throughout Haven’s Wake we hear the cicada and grasshopper and bumblebee songs, smell the tasseled corn, touch the rich black soil, watch thunderheads build and disperse. As the novel nears its climax, a summer storm inundates a nearby town but completely misses the Grabel farm. So, too, the family storms may batter the participants but they ultimately continue their lives together and apart. In the hands of an inexperienced author, this parallel would be too heavy-handed. Randolph, however, handles the connection with great finesse.

After the funeral home viewing, when problems and passions are most tense and intense, one of the Grabel wives says to her husband, “You know, Jonathan, yours isn’t the only family that behaves badly when it’s grieving.” How very true. Closing Haven’s Wake, I just now glanced at the cover and for a moment misread the title. My eyes saw “Heaven’s Wake,” rather than Haven’s. Perhaps that’s part of the title’s magic, and the novel’s magic, too. Despite the grievances, the family endures. That’s the real aftermath of Haven Grabel’s demise.    – Ann Ronald

Ann Ronald is a retired English professor from the University of Nevada, Reno. Author of dozens of reviews, she’s also written a number of books about the American West. They include literary studies such as The New West of Edward Abby and Reader of the Purple Sage, cultural studies such as GhostWest and Oh, Give Me a Home, and nature writing such as Earthtones: A Nevada Album. Her latest is a work of fiction, Friendly Fallout 1953. Since retiring, she’s been reading vociferously, so “Bookin’ With Sunny” is giving her a wonderful opportunity to share thoughts about her favorite new discoveries.
More from this reviewer
PrevWilderness
When Did You See Her Last?Next