Home » Reviews » Why I Am Not a Feminist

Why I Am Not a Feminist 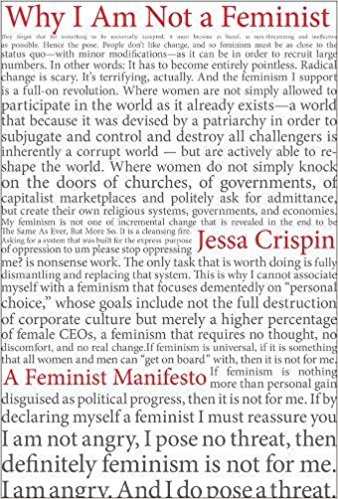 WHY I AM NOT A FEMINIST

Like veteran news anchorman Howard Beale in the 1976 film Network, Jessa Crispin is “mad as hell,” and she’s “not going to take it anymore!”

Her beef is with how the tenets of feminism have been watered down to the point of innocuousness. In an effort to market the female liberation movement to a more universal base, she claims that like breakfast cereal, it has lost its snap, crackle, and pop.

Revolution has been traded for palatability,

Instead of rebranding feminism as a movement based on fairness and community and exchange, Crispin says it has been dumbed down to become as “banal, as non-threatening and ineffective as possible.”

“Are you a feminist?” she asks. “Do you believe women are human beings and that they deserve to be treated as such? That women deserve all the same rights and liberties bestowed upon men? If so, then you are a feminist . . . or so the feminists keep insisting.”

Instead, she advocates that her “feminism is not one of incremental change that is revealed in the end to be The Same As Ever, But More So. It is a cleansing fire…. The only task that is worth doing is fully dismantling and replacing that system.”

This 150-page book is a fast, snappy read. Sentences are short and punchy, a style that suits the book’s overriding tone of outrage

Take the chapter Men Are Not The Problem.

My beef with Crispin is that she does unto others what she claims others have done unto the women’s movement. She dismisses the Suffragette Movement, Betty Friedan, and Gloria Steinem as “white feminists” interested mainly in “self-empowerment” as an outgrowth of consciousness raising.

It would be easy for me as an early president of San Diego NOW who cut my teeth on white feminism to give this manifesto short-shrift on that basis alone, as well as her diatribes about marriage, beauty, and romantic love.

But to Crispin’s credit, her worldview, and the work we should all be doing to make that world sensational is worth deep thinking and reinvigorated activism.

Says Crispin, “Many of the ideas that were floated as potential goals for second wave feminism (like universal childcare and better schools) never found traction with the movement at large, because once you reached a certain level of money, fame or other commodities, it would be more personally advantageous for you to fight for your own needs rather than contribute to a system that offered fairness for all.”

Crispin’s incendiary call-to-arms about what we should all be doing now to reform and inspire can change the world.

Why I Am Not A Feminist: A Feminist Manifesto is a great book to bring to your next conscious-raising session.   – Sheila Sobell

Also available by Sheila Sobell:  The Doctor’s Guide to Diabetes and Your Child (with Allan E. Sosin); Smart Guide to Sports Medicine. 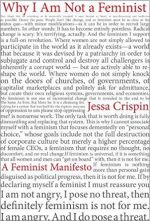 Sunny Solomon holds an MA in English/Creative Writing, San Francisco State University. She is a book reviewer for “The Clayton Pioneer” and her poetry and other writing has been published in literary journals, one chapbook, In the Company of Hope and the collection, Six Poets Sixty-six Poems. She was the happy manager of Bonanza Books, Clayton, CA and Clayton Books, Clayton, CA. She continues to moderate a thriving book club that survived the closure of the store from which it began. Sunny currently lives next to the Truckee in Reno, NV.
More from this reviewer
PrevA Gentleman in Moscow
Czeching In: Adventures Beyond PragueNext