Home » Reviews » A Gentleman in Moscow

A Gentleman in Moscow 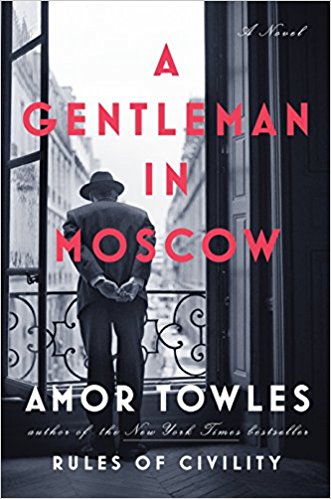 A GENTLEMAN IN MOSCOW

Imagine incarceration, not in an isolated prison cell but in a bustling Moscow hotel, not for a week or a month but for decades. Such is the fate of Count Alexander Ilyich Rostov, “recipient of the Order of Saint Andrew, member of the Jockey Club, Master of the Hunt,” imprisoned in 1922 for his heritage and for signing his name to what the People’s Commissariat deemed a subversive poem. Thus Amor Towles’ protagonist, the gentleman in Moscow, finds himself under house arrest in the archetypal Metropol, a luxury hotel renowned for its Art Nouveau décor and its early twentieth-century elegance.

Now imagine a novel nearly five hundred pages in length that rarely leaves the confines of the Metropol except when Count Rostov’s imagination takes flight. Imagine, too, a protagonist so charming and a narrative so mesmerizing that every one of those pages brings new intellectual and aesthetic delights. A Gentleman in Moscow is a book to savor. Its multiple themes will linger in any reader’s imagination long after the final page has been turned.

The rise of the proletariat controls Count Rostov’s fate. A Gentleman in Moscow conveys on-going commentary about how communism affects not only Rostov’s confinement arrest but all the Russian people, for decades. Despite the narrowness of Rostov’s individual plight, the panoramic breadth of Russian history sweeps throughout the novel. So does constant commentary about the arts. Rostov, who reads widely, often compares current events to literary situations. I loved Towles’ literary asides, as they reminded me of essays, poems, and novels I read years ago. Should I open War and Peace again? Or reexamine essays by Montaigne?

Russian architecture recurs thematically, too, both inside the Metropol and out, a set of side-bars to pertinent historic events. The Metropol’s interior sets the scenes in motion. At the same time, crumbling buildings and razed edifices underscore the plight of the people who live in Moscow, as do unfortunate restrictions on the visual and acoustical arts. Russian attitudes toward music are crucial to the novel’s trajectory, especially when one of the young hotel residents proves to be a gifted pianist. Her opportunities direct the action of A Gentleman in Moscow’s final chapters and actually dictate the denouement. And then there are the splendors of exquisite cuisine. Because Count Rostov savors epicurean food and wine pairings, a grandiose Metropol restaurant in some ways determines how he endures his captivity.

Early in this stunning tour de force, Towles writes about character, asking “what can a first impression tell us about anyone? Why, no more than a chord can tell us about Beethoven, or a brushstroke about Botticelli. By their very nature, human beings are so capricious, so complex, so delightfully contradictory, that they deserve not only our consideration, but our reconsideration—and our unwavering determination to withhold our judgment until we have engaged with them in every possible setting at every possible hour.” Thus he populates the Metropol with men and women who constantly engage the reader. More important, I think, is the fact that he fills A Gentleman in Moscow with a complex of ideas that deserve reconsideration from every possible angle a reader can bring to bear. It is a book that absorbs the reader at every possible hour, not in a panoramic setting but in a microcosm that images the macrocosmic world. I relished Amor Towles’ first novel, The Rules of Civility; A Gentleman in Moscow is even more astute. – Ann Ronald 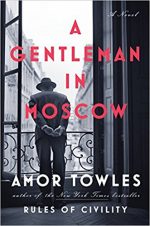 Ann Ronald is a retired English professor from the University of Nevada, Reno. Author of dozens of reviews, she’s also written a number of books about the American West. They include literary studies such as The New West of Edward Abby and Reader of the Purple Sage, cultural studies such as GhostWest and Oh, Give Me a Home, and nature writing such as Earthtones: A Nevada Album. Her latest is a work of fiction, Friendly Fallout 1953. Since retiring, she’s been reading vociferously, so “Bookin’ With Sunny” is giving her a wonderful opportunity to share thoughts about her favorite new discoveries.
More from this reviewer
PrevThe Faraway Nearby
Why I Am Not a FeministNext