Home » Reviews » The Faraway Nearby 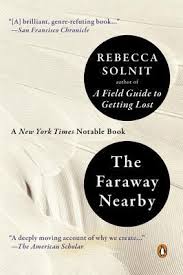 Rebecca Solnit’s collection of nature essays The Faraway Nearby has a distinctive, graceful prose style that in some passages leaves this reader giddy with its effervescence. It is constructed of an assemblage of memories, meditation, ideas, and analyses—often painful, vexing, or merely fascinating. The chapter headings are a palindrome of sorts, the ones in the last half a repetition, in reverse order, of the first half. This arrangement may at first glance give the appearance of circularity, but on a fuller, deeper read Solnit’s narrative trajectory resembles more closely an ascending helix in which she achieves both understanding and healing.

The first and last chapter titles are both “Apricots.” Why apricots? There’s a story here; indeed, she includes many stories about the six or seven years or her life that The Faraway Nearby covers. The entire book is a series of stories, each leading to another, each somehow elliptically imbedded in or emerging out of the one before. The story about the apricots begins one day with the arrival at her house of three boxes of the fruit in various stages of ripeness and beyond. The apricots have been picked by her brother from her mother’s tree. As Solnit sorts the fruit for various uses, including composting, the story of the apricots leads to the story of her mother’s dementia, to her relationship to her mother, and takes us then to a fairytale about an accursed queen who eventually achieves disenchantment.

Disenchantment is a state of being which, Solnit observes, is “the blessing of becoming yourself.” That story leads to other fairytales, the real ones, grim ones, not those that have been bowdlerized or otherwise disinfected. Then, as If I needed more to think about, Solnit provides a penetrating explanation on the variety of meanings to be found in Mary Shelly’s Dr. Frankenstein, a story in part about a monster who cannot achieve disenchantment.

The stories may appear at first reading to be unrelated, but it is soon evident that Solnit is not subjecting the reader to a whimsical set of loose associations. Solnit admits to being inspired by One Thousand and One Arabian Nights. Those tales had a purpose: Scheherazade told them to save her life. Solnit tells these stories in The Faraway Nearby to save her life more metaphorically. Her stories, as were Scheherazade’s, are inspired by her reading, her beliefs, her culture and history, her joys and griefs, and her view of the interconnectedness of all beings.

At the bottom of each page of The Faraway Nearby, from page one until its end, is a running story about a particular moth of Madagascar that “drinks the tears of sleeping birds.” Solnit pursues the idea of givers and takers and symbiosis more generally through a meditation and collection of associations that eventually includes us all; it’s a wonderful, brilliant framing device. I have to admit, however, that after I finished reading the book, I had to re-read the commentary at the bottom of each page. Only then could I begin to understand it as a whole.

The Faraway Nearby is the first book of Solnit’s that I’ve read. It won’t be the last. My thanks to Krista Tippet’s “On Being” for inspiring me to read Rebecca Solnit, a very bright light in our often-dismal public discourse.   – Neal Ferguson

Also available by Rebecca Solnit: Men Explain Things to Me; A Field Guide to Getting Lost; Hope in the Dark; Wanderlust; A Paradise Built in Hell; The Mother of All Questions; River of all Shadows; Infinite City: A San Francisco Atlas; Encyclopedia of Trouble and Spaciousness; Savage Dreams; A Book of Migrations; Storming the Gates of Paradise; As Eve Said to the Serpent; Hollow City; Secret Exhibition; A California Bestiary; Motion Studies; Yosemite in Time: Ice Age; Nonstop Metropolis: A New York City Atlas; Left in the Dark, Portrait of San Francisco Movie Theatres; Streetopia; The Sky Book; Drowned, the Death and Rebirth of Glen Canyon on the Colorado; Unraveling the Ripple; Michael Lundgren, Transfigurations; Petah Coyne; Michael Light, Lake Las Vegas/Black Mountain. 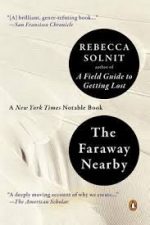 Neal Ferguson is a self described Anglo-phile. After studying for a PhD in British history and doing research for a year in various British archives, he came to the University of Nevada in 1970 to teach. Soon he found himself in administration where he remained until 2003. After returning to full-time teaching a decade ago, he decided to concentrate his teaching energies on Medieval British history and various global aspects of World War II. Dedicated to Ambrose Bierce’s proclamation that the purpose of war is to teach Americans geography, Neal insists that his students accompany him (in class) to sundry east European rivers and steppes, African deserts and jungles, south-east Asian mountain ranges and peninsulas, and small islands and coral reefs in the Pacific. Currently he is writing a book about the ups and downs of General Douglas MacArthur’s military reputation.
More from this reviewer
PrevValley of the Moon
A Gentleman in MoscowNext