Home » Reviews » Valley of the Moon

Valley of the Moon 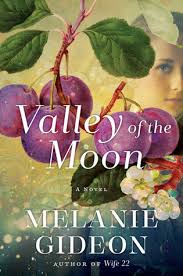 VALLEY OF THE MOON

When I was a girl, perhaps ten years old, my parents treated me to a matinee staging of Brigadoon. I’ve never forgotten the singers’ voices, the Scottish bagpipes, the mystery of a tiny town lost in time. Any story reminding me of that magical day intrigues me still. Melanie Gideon has written an updated rendition, Valley of the Moon, which transports the Gaelic fairy tale to twentieth-century California. Her update loses none of the original’s enchantment.

The mythical Greengage, founded in 1889 as a farming community of four hundred residents, disappears from its Sonoma location on April 18, 1906. When the ground stops shaking after the destructive San Francisco earthquake, the men, women, and children of Greengage find themselves surrounded by a lethal fog. They can neither leave their surroundings nor communicate with the outside world. Fortunately, their agriculture allows them to be self-sustaining, so they live from day to day, remaining unaware of what is happening elsewhere.

Enter Lux Lysander, a young unwed mother taking a break from her responsibilities. While her roommate babysits, Lux drives north from San Francisco for a weekend of camping and self-reflection at Valley of the Moon State Park. The year is 1975. In the middle of the night, with fog everywhere, she finds herself temporarily disoriented. When the fog dissipates, she finds herself approaching Greengage, its buildings and residents looking like something out of a history book. The year is 1906.

The remainder of Valley of the Moon takes Lux back and forth between her contemporary San Francisco life and the world she discovers at Greengage. Her travels are necessarily infrequent, however, because she can only slip through the fog on nights with a full moon, and the fog appears only erratically. Sometimes a few months pass before she can return to the mythical scene; sometimes several years slide by. Even though Lux measures time as we would, time remains arrested in Greengage. A single month there might encompass years outside the fog.

Melanie Gideon, in fact, is riffing on notions of time. She writes, “Time is a construct, one we all inherently begin to abide by the moment we are born. Yes, we will live out our days hanging from its invisible scaffolding. Morning. Noon. Night. Weeks. Months. Years. Time civilizes us. It brings order to chaos. Without it, there isn’t any gravity, and no longer pinned to the world, we float away.” This is the heart of Lux’s dilemma, as she time-travels without gravity on an invisible scaffolding between two competing worlds. With her son, with her parents, with her San Francisco friends, with her monthly trips to Valley of the Moon, Lux experiences time as an actionable process. Her son grows to manhood, her parents age, she ages, too. Meanwhile, in Greengage, time stands almost still.

Gideon allows Lux some latitude, but she never offers her protagonist an easy solution. Greengage tugs at Lux’s heart in unforeseen ways, but her loyalty to her family pulls her heartstrings, too. Where is she the happiest? Even Lux can’t quite tell, as she travels between reality and myth. When I was reading her story, I marked the paragraph quoted above, for I thought it got to the core of Gideon’s presentation. When I got to the end of the novel, I found Gideon’s answer, the same answer, I think, that suspends Brigadoon in my imagination. “Time no longer tethered us. Love did,” reads the final sentence. Only by immersion in Valley of the Moon can a reader understand the love that transcends both of Lux’s worlds. Like Brigadoon’s archetypal fate, Lux’s love makes for a satisfactory and timely conclusion.   – Ann Ronald

Also available by Melanie Gideon: Wife 22; The Slippery Year, a Meditation on Happily Ever After; Pucker; The Map that Breathed; The Girl Who Swallowed the Moon. 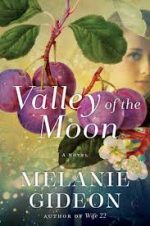 Ann Ronald is a retired English professor from the University of Nevada, Reno. Author of dozens of reviews, she’s also written a number of books about the American West. They include literary studies such as The New West of Edward Abby and Reader of the Purple Sage, cultural studies such as GhostWest and Oh, Give Me a Home, and nature writing such as Earthtones: A Nevada Album. Her latest is a work of fiction, Friendly Fallout 1953. Since retiring, she’s been reading vociferously, so “Bookin’ With Sunny” is giving her a wonderful opportunity to share thoughts about her favorite new discoveries.
More from this reviewer
PrevHué 1968: A Turning Point of the American War in Vietnam
The Faraway NearbyNext