Home » Reviews » Hué 1968: A Turning Point of the American War in Vietnam

Hué 1968: A Turning Point of the American War in Vietnam 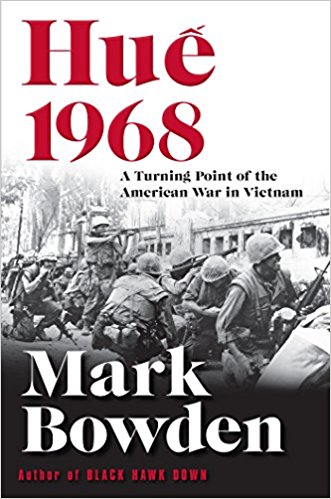 HUÉ 1968: A TURNING POINT OF THE AMERICAN WAR IN VIETNAM

Mark Bowden, who wrote the phenomenally successful Black Hawk Down (book and movie), has now published the equally commendable Hué 1968, a book that will likely become the standard account of the grisly encounter that began on the first day of Tet (the Lunar New Year), January 31, 1968. For Bowden, the importance of the conflict in Hué can hardly be overstated: it resulted in the American leaders deciding to exit Viet Nam without winning the war and in American citizens coming to mistrust their leaders with rare intensity (until more recent times).

While these effects are of considerable importance, Bowden’s book succeeds on several levels for other reasons. He doesn’t write from an America-only point of view, he doesn’t make the battle’s outcomes central to the story he tells, and he tethers most of his stories to those civilians and combatants in the city’s contested precincts. Bowden in Hué 1968 gives the reader a 360 degree and an “all ranks” view of the battle.

Bowden begins evocatively by following an eighteen-year-old woman named Che Thi Mung as she rides her bicycle into Hué along the Perfume River to sell woven palm leaf hats to help support her family. She is also a committed Viet Cong operative who daily gathers information about the city’s defensive preparations and readiness for war. Up until January 1968, Hué has been spared from the war’s destruction, a blessing that is about to be withdrawn. Che gathers and turns over intelligence that will help the combined Viet Cong and the North Vietnamese Army attack Hué, the most decisive part of the entire Tet Offensive.

After Che’s introduction to the reader, Bowden multiplies his perspectives. His kaleidoscope picks up an enlisted Army radio man, Frank Doezema, 19, who found himself in Hué on January 30 with thirty-nine days left until his scheduled return to the States. He had seen plenty of action during his year in the country. Unusually, he had made friends with some Vietnamese during his tour.

From Che and Doezema, Bowden switches lenses to capture a few of those less connected with the reality on the ground. LBJ, a president whose interests were decidedly domestic, now found himself by November 1967 trapped into directing a war that would define his presidency. General William Westmoreland was the US commanding general who believed then and forever that the main show would be/was at Khe Sanh, a conceptual error of cataclysmic proportions.

Agonizingly, one of the characters in this gritty tragedy is Hué itself. In the view of both North and South Vietnamese, it is the third most important city after the respective capitals of Saigon and Hanoi. It is the ancient religious and cultural capital of Viet Nam. It is home to a highly educated citizenry, many of whom, from the North Vietnamese perspective, need to be re-educated or executed as appropriate. Nearly three thousand Hue citizens will be relegated to unmarked graves. Initially, the American and South Vietnamese armies try to preserve the graceful architecture of the Citadel, Hués hub, but the exigencies of urban warfare will reduce much of it to rubble and leave the remainder punctured by bullets, grenades and rocket fire.

Mark Bowden shows us in graphic detail why the North Vietnamese lost this battle but won the war and how stupid is the old saw: “the victors write history.” The Tet Offensive and principally the battle for Hué produced a stalemate that would eventually favor the North Vietnamese; the Americans would go home in 1975 much as did the French twenty years previously. As far as victors writing history—in this war, the war the Vietnamese call the American war—it is obvious that the losers have spilled far more ink writing this history than the winners ever will.   – Neal Ferguson 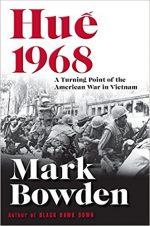 Neal Ferguson is a self described Anglo-phile. After studying for a PhD in British history and doing research for a year in various British archives, he came to the University of Nevada in 1970 to teach. Soon he found himself in administration where he remained until 2003. After returning to full-time teaching a decade ago, he decided to concentrate his teaching energies on Medieval British history and various global aspects of World War II. Dedicated to Ambrose Bierce’s proclamation that the purpose of war is to teach Americans geography, Neal insists that his students accompany him (in class) to sundry east European rivers and steppes, African deserts and jungles, south-east Asian mountain ranges and peninsulas, and small islands and coral reefs in the Pacific. Currently he is writing a book about the ups and downs of General Douglas MacArthur’s military reputation.
More from this reviewer
PrevThe Soul of an Octopus
Valley of the MoonNext