Home » Reviews » The Soul of an Octopus

The Soul of an Octopus 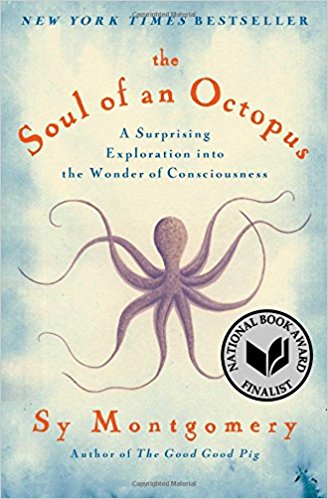 THE SOUL OF AN OCTOPUS

When the proprietress of Seaport Books, in La Conner, Washington, recommended Sy Montgomery’s The Soul of an Octopus, I must admit I scoffed. “Come Hook a Book” was the watchword of this small independent bookstore, however, and the owner managed to persuade me that I would easily be hooked by a naturalist/journalist investigation of octopus lives. Even the book’s subtitle, “A Surprising Exploration into the Wonder of Consciousness,” promised a good read. Besides, my partner urged me to acquiesce. So I bought The Soul of an Octopus,” and discovered one of the best examples of “immersion journalism” I’ve ever encountered.

“Immersion journalism” takes a reporter into an unfamiliar world. Once there, the writer becomes absorbed by the subject matter, compelled to investigate and experience every aspect of that particular milieu. In this case, Sy Montgomery wants “to touch an alternate reality,” ”to explore a different kind of consciousness.” As her book progresses, she grows intrigued by an aquatic animal that few of us would call soft and cuddly, but one that boasts amazing physical and intellectual capabilities. By the time I finished The Soul of an Octopus, I was hooked. Montgomery, the exploring writer, was hooked from the very beginning.

She starts with an intimate encounter with a captive octopus named Athena, who enthusiastically touches Montgomery with her suckers and who changes colors with her moods. When Montgomery strokes her head, Athena is happily white. Unfortunately, Athena doesn’t live long, so Montgomery has little time to get to know this octopus well. But almost immediately, the New England Aquarium acquires a replacement, Octavia, and then invites Montgomery to befriend their new charge. Octavia, less sociable than Athena, is hesitant in her new surroundings. Before long, however, Montgomery and the Boston aquarists who care for her, are discovering her personality, her likes and dislikes, her aptitude and attitudes.

Characteristically intelligent, an octopus learns rapidly and has remarkable retention. Almost every page of The Soul of an Octopus introduces another fascinating octopus trait until I almost felt like I was reading about a warm and cuddly kitty or puppy instead of an oceanic amorphous mollusk with eight arms. When another octopus arrives at the aquarium, Montgomery is able to distinguish their traits and their talents. Where Octavia is stand-offish, Kali is charismatic; Octavia, mercurial, Kali consistently engaged with any humans nearby. Such interaction leads Montgomery to want more. Thus her story proceeds to other aquariums and finally to sea dives where she can encounter an octopus or two in their native habitats.

All of this happens during an informative narrative that goes far beyond a biological fascination for these prehensile creatures of the sea. As her subtitle suggests, Montgomery is also interested in consciousness and the philosophical implications of animal/human interaction. Throughout The Soul of an Octopus, she makes reference to literature, to theorists, to history. A characteristic of Athena can lead to a riff on Alfred, LordTennyson, or a behavior pattern of Kali can segue into a digression about Prakitra dancing on the body of Lord Shiva. I personally found Mongomery’s theoretical allusions as provocative as the octopus behavioral analysis so prevalent on every page.

The proprietress of Seaport Books didn’t lead me astray after all. Rather, she led me into a depth of cephalopods, plus a bonus of mythology, history, and biology. I join the insightful bookstore owner, whose name I do not know, in strongly recommending The Soul of an Octopus to anyone interested in expanding his or her intellectual boundaries.   –  Ann Ronald 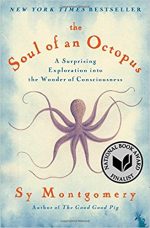 Ann Ronald is a retired English professor from the University of Nevada, Reno. Author of dozens of reviews, she’s also written a number of books about the American West. They include literary studies such as The New West of Edward Abby and Reader of the Purple Sage, cultural studies such as GhostWest and Oh, Give Me a Home, and nature writing such as Earthtones: A Nevada Album. Her latest is a work of fiction, Friendly Fallout 1953. Since retiring, she’s been reading vociferously, so “Bookin’ With Sunny” is giving her a wonderful opportunity to share thoughts about her favorite new discoveries.
More from this reviewer
PrevI Hadn’t Meant to Tell You This
Hué 1968: A Turning Point of the American War in VietnamNext