What the Eyes Don’t See 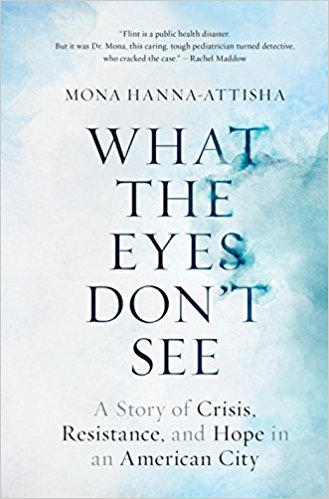 WHAT THE EYES DON’T SEE

The contributions of immigrants to the articulation of and striving towards the “American Dream” are unassailable. Those contributions are still being made as evidenced by this memoir account of the Flint, Michigan water crisis of 2015. Mona Hanna-Attisha is a pediatrician of Iraqi descent, primarily a clinician and teacher of MD’s in pediatric residencies. So, she is a medical practitioner, not a researcher. Importantly, she is an example of what I imagine more of us Americans could be like.

Somewhat by accident, she comes across evidence that the water in Flint, Michigan may be poisoning those who drink it due to dangerous lead levels. She is horrified both for specific and general reasons. Specifically, she has been advising mothers of infants to mix their children’s powder formula with tap water even though she is vaguely aware that there may be some issue with the local water supply. Generally, she is horrified by the prospect of thousands of infants being subjected to lead poisoning and the proven harmful impacts it has on their early mental and physical development. Clean, safe water is a right! Right?

Within a matter of days, her concern turns to outrage as she begins to understand that everyone in a position of authority, from the Governor of Michigan to the Flint politicians, including the paid professionals responsible for public health at all levels of Michigan government, are united in their public claims that the Flint water supply is safe and that muckrakers like Hanna-Attisha are misinformed, irresponsible, or publicity-seekers. Dr. Mona Hanna-Attisha is neither misinformed nor irresponsible. After all, what is a pediatrician supposed to be doing other than protecting the health of the recently born? She uses publicity, not for herself but to get the issues out into the public sphere. And she convinces one person in power to do the right thing.

Hanna-Attisha is a passionate woman, physician, wife, and mother. It also turns out that she can be a passionate scientist, too. With the help of several others as concerned as she is, she builds a scientific, evidence-based, statistically sophisticated, epidemiological study, one that will stand peer review, in a matter of several weeks. How she obtains access to the data that those in power have, but are determined to hide, is a suspenseful story in itself. Set that story in the context of racism, poverty, politics, megalomania, and ill-will. Then, it takes on a larger meaning, a meaning indicating that the story of modern America must include a space where the “American Dream” is more vaporous and transient than most dreams.

If America is anything, it is an ideal, one that can never be entirely realized, only reached for, always in the process of unfolding. When Martin Luther King claimed that the arc of history bends towards justice (a paraphrase), we must step back from his lofty language and conclude that the arc is not a smooth one. It has its dips and backsliding moments. What the Eyes Don’t See provides a glimpse of a minute increment of the arc towards justice; it is indeed bumpy and often susceptible to deflection from those whose motives aren’t reflective of America at its best. I finished this book both proud and ashamed of what we have become. – Neal Ferguson 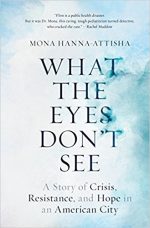 Neal Ferguson is a self described Anglo-phile. After studying for a PhD in British history and doing research for a year in various British archives, he came to the University of Nevada in 1970 to teach. Soon he found himself in administration where he remained until 2003. After returning to full-time teaching a decade ago, he decided to concentrate his teaching energies on Medieval British history and various global aspects of World War II. Dedicated to Ambrose Bierce’s proclamation that the purpose of war is to teach Americans geography, Neal insists that his students accompany him (in class) to sundry east European rivers and steppes, African deserts and jungles, south-east Asian mountain ranges and peninsulas, and small islands and coral reefs in the Pacific. Currently he is writing a book about the ups and downs of General Douglas MacArthur’s military reputation.
More from this reviewer
PrevLies She Told
Tahoe SkydropNext