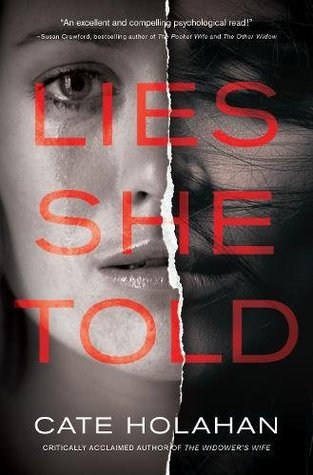 As I read Cate Holahan’s Lies She Told, I felt like my brain was on a swivel. Two stories ricochet back and forth in this novel, one about a woman who writes romantic thrillers and the other about her look-alike fictional creation. The circumstances of the two women, their relationships, their actions, and their reactions, mirror one another. But Holahan is far too inventive to make the likenesses too exact. Rather, the similarities are suggestive, leaving much to the reader’s imagination.

At first glance, the parallels are slightly obscure. Liza, who has written one best-seller and two flops, is being nagged by her agent to quickly produce a new manuscript. Distracted by the throes of hormone therapy and desperate to conceive a child, Liza has trouble concentrating. She does her best, however, imagining a heroine named Beth who, after the same hormone treatment, has successfully given birth to a beloved new daughter. The husbands of the two women bear some resemblance to the each other, too. Both are attorneys, and both seem to be distancing themselves from their wives.

Liza’s husband, David, is distraught because his law partner has gone missing. Frantic about Nick’s disappearance and overworked by the resulting double caseload, David pays little attention to Liza. He all but ignores her increasing frustration at his inattentiveness and her all-consuming desire to become pregnant. Beth’s fictional husband, Jake, is equally aloof, spending long hours at the office and acting disinterested whenever he does come home. Jake suspects Beth has post-partum depression; Beth suspects Jake is having an affair.

Lies She Told is another one of those novels where a reviewer can reveal only a minimal amount of plot summary to a potential reader. Suffice to say, the twists and turns are extraordinary. The pace is hectic, too. Alternate chapters relay the two stories, and at first, both are leisurely narrated. By the middle of the novel, the tension heightens and the chapters shorten. That’s when my brain began feeling like a ping pong ball bouncing between the developing crises. Sometimes I hardly knew which protagonist was which, although Holahan’s structure is always clear. It’s the reader’s involvement in the characters and their individual storylines that blurs the distinctions.

Even more intense is the denouement of each plot. While I had guessed some of what would happen, the final few chapters blind-sided me. Holahan never missteps, however. Her characters always behave in ways that proceed naturally from previous actions. Even so, the surprises are intense. I finished Lies She Told almost out of breath at the concluding scenes. I even had to read the last two chapters twice each, although ultimately the ending of each narrative thread made perfect sense. I just needed to wrap my imagination around Holahan’s imagination (and Liza’s).

Do I recommend Lies She Told? Absolutely. The book is a stunning riff on marriage, on fidelity and infidelity, on hormones gone awry. It also is a structural tour de force, with an intuitive design that compels the reader’s full attention. Holahan is to be congratulated on a novel that succeeds artistically as well as it succeeds emotionally.   – Ann Ronald 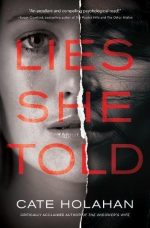 Ann Ronald is a retired English professor from the University of Nevada, Reno. Author of dozens of reviews, she’s also written a number of books about the American West. They include literary studies such as The New West of Edward Abby and Reader of the Purple Sage, cultural studies such as GhostWest and Oh, Give Me a Home, and nature writing such as Earthtones: A Nevada Album. Her latest is a work of fiction, Friendly Fallout 1953. Since retiring, she’s been reading vociferously, so “Bookin’ With Sunny” is giving her a wonderful opportunity to share thoughts about her favorite new discoveries.
More from this reviewer
PrevHow It All Began
What the Eyes Don’t SeeNext