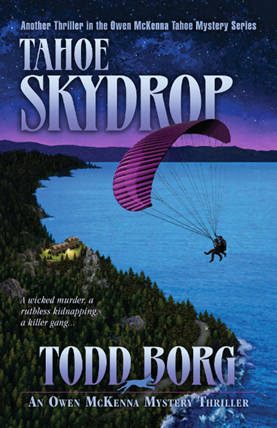 If you are planning a trip to Lake Tahoe this summer, don’t forget to bring along Todd Borg’s Tahoe Skydrop the latest book in his Owen McKenna Mystery Thriller series. Even if you’re not headed up to the Sierra, you won’t want to miss this one in which McKenna, that early-retired San Francisco cop, finds the first death taking place not on the ski slopes or beachfront properties, but in a helicopter well above any Sierra summit.

It’s been a while since I’ve picked up a mystery and Borg reminds me how much fun this genre is. Borg’s mysteries are FF: Fast Fun. From his prologue, which takes place in the small passenger section of a Bell helicopter, the reader is almost immediately holding her breath, never certain which passenger is going to be shoved out to their death. Borg is at his best with the physicality of his fight and chase scenes. But no chases here, just a lot of unbelievable action in very close quarters. I’m still not sure if I read this scene or saw it; Borg can make you feel like you are watching a movie, not reading a book.

The prologue ends once the victim has fallen to certain death. Owen McKenna then takes over. Tahoe Skydrop, for this reader, is a one-sitting read. From the moment a distraught mountain climbing dad begs McKenna to find his kidnapped son, an eleven-year-old geek, (please, absolutely no police!) until we know of the boy’s connection to the first murder victim (the count never remains at one), the pace is nonstop. But in this mystery, the nonstop is the story and the byzantine planning of how to rescue the boy (paragliding and rollerblading) from a highly fortified mountain home once owned by Isaiah Hellman. Time is critical!

For all of us non-geeks, Skydrop is a crash course in the tech world of robotics, and the generous money folk who give life to an entrepreneur’s dream and the money-grabbing folk who want to steal the dream if they can discover the heavily encrypted password. The bad guys are members of a notorious Swedish prison brotherhood, who give new meaning to the word brotherhood. The kidnapped boy’s father is drawn into the plot if he wants to see his son alive. McKenna, childless himself, is a sucker for a family in trouble, and this family has more than missing son trouble.

McKenna’s girlfriend, Street, and his Harlequin Dane, Spot, are major players in the story. Only one of his police friends becomes involved in this particular thriller, and Borg lets the reader see why Martinez continues to be such a good friend. Although the thugs are captured, we must wait until the epilog to find out who among the cast of characters was the mastermind. In this story, the reader’s attention is key, and I wouldn’t bet a single bitcoin you’ll guess correctly.

I can’t imagine ever tiring of dropping in on Owen McKenna who now feels like family. Between the history and beauty of Lake Tahoe present in every McKenna mystery, and the relevant subjects contained in Skydrop, Borg takes his readers into a nail-biting and enlightening look into the future.  –  Sunny Solomon 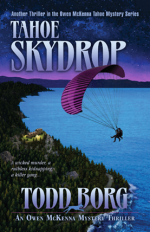 Sunny Solomon holds an MA in English/Creative Writing, San Francisco State University. She is a book reviewer for “The Clayton Pioneer” and her poetry and other writing has been published in literary journals, one chapbook, In the Company of Hope and the collection, Six Poets Sixty-six Poems. She was the happy manager of Bonanza Books, Clayton, CA and Clayton Books, Clayton, CA. She continues to moderate a thriving book club that survived the closure of the store from which it began. Sunny currently lives next to the Truckee in Reno, NV.
More from this reviewer
PrevWhat the Eyes Don’t See
Travels with Myself and Another — Love and RuinNext