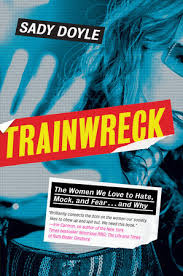 Trainwreck: The Women We Love to Hate, Mock, and Fear . . . and Why

Trainwrecks, Sady Doyle metaphorically muses, are women who have lost control of their own narratives.  Whether their personal behaviors caused their degradation, or whether their downfalls derive solely from being shamed by others, trainwrecks signal something crucial to all other women: “well, at least I’m not that girl” (italics, Doyle’s).  Thus, Sady Doyle has written Trainwreck, an anatomy of trainwrecks that serves as a warning to her women readers who must ponder “The Women We Love to Hate, Mock, and Fear . . . and Why.”

Doyle’s assessment moves tellingly between centuries and genres.  Each chapter, in fact, begins with a current trainwreck or two and then analyzes a historic figure whose life and reputation rightly underscores the pattern Doyle chooses to discuss.  The first chapter of Trainwreck, “Sex,” opens with allusions to Britney Spears, Paris Hilton, Lindsay Lohan, and Miley Cyrus, followed by an in-depth analysis of Mary Wollstonecraft.  Doyle makes astute connections between the way we view our contemporaries in the time of Facebook and Twitter versus the way Mary Wollstonecraft was perceived via the words of nineteenth-century men of letters.  The media shapes the narrative for each of these “fallen” women.

Subsequent chapters focus on other so-called “foibles,” such as “Need,” “Madness,” and “Death.”  Especially in the latter two chapters, she points out the double-standards by which women are judged.  Princess Diana, for example: “Alive, she was a madwoman and a blight on the British Crown.  Dead, she was Ophelia, lost and lovely, garlanded and mourned as she passed downstream.”  I can’t imagine any more accurate figurative synopsis than that, conflating the disgrace and deification of a public icon.

Whereas the first four chapters outline the trainwrecks’ supposed crimes, the next two consider their options.  Trainwrecks can either “Shut Up” or “Speak Up.”  Finally, they can choose one of two roles, “Scapegoat,” or “Revolutionary.”  What I like best about Trainwreck, and there are many things to like about Doyle’s investigation, is the fact that she doesn’t ever sound judgmental.  Rather, she writes respectfully about tragic self-destructive tendencies that may accompany soaring accomplishments.  Doyle’s assessments of Billy Holliday’s and Sylvia Plath’s voices, I think, are particularly profound.

Doyle’s tone is worth mentioning, too.  Her wit shines on almost every page.  Even when the subject matter she is dissecting can be intolerably tragic, she writes with a joie de vivre that pulls the reader into the Trainwreck narrative.  Doyle speaks conversationally to her audience.  Even when digging into public records or delving into literary criticism to prove her points, she does so with chatty language and syntax.  Trainwreck, in effect, is a hen party, a very smart gathering of women but a gossipy enclave nonetheless.

Doyle draws inescapable parallels between trainwreck characteristics and patterns we all might recognize in our lives.  That’s another charming aspect of her book, the way she makes every one of us part of a schema that’s inappropriate but inevitable.  Trainwreck gives the reader a lot to think about, not only regarding how we interpret other women’s behaviors but also how we allow men to shape our stories.  Sady Doyle has written an important book, one that deserves a wide audience of thoughtful readers.   –  Ann Ronald

Sady Doyle is a journalist living in Brooklyn, New York. She won the Women’s Media Center Social Media Award in 2011. 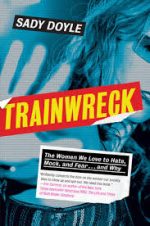 A Strong West Wind and Fire Season: Field Notes from a Wilderness Lookout When I go on an extended road trip, I always carry along

Ann Ronald is a retired English professor from the University of Nevada, Reno. Author of dozens of reviews, she’s also written a number of books about the American West. They include literary studies such as The New West of Edward Abby and Reader of the Purple Sage, cultural studies such as GhostWest and Oh, Give Me a Home, and nature writing such as Earthtones: A Nevada Album. Her latest is a work of fiction, Friendly Fallout 1953. Since retiring, she’s been reading vociferously, so “Bookin’ With Sunny” is giving her a wonderful opportunity to share thoughts about her favorite new discoveries.
More from this reviewer
PrevSearch for the New Land
Manjhi Moves a MountainNext