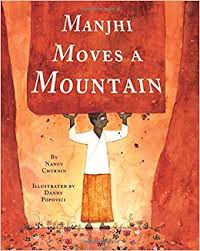 When asked what kind of book I most enjoy reviewing, children’s picture books are right up there near the top. I’m a fairly pragmatic person, preferring stories about people, grownups or children, instead of trucks and animals that often are stand-ins for the real thing. When a picture book such as Manjhi Moves a Mountain comes along in which the main character is a young man at the beginning of the story until the end when he has become a very old man, I’m already looking forward to reading it.

Manjhi Moves a Mountain is that book. The two main characters are exactly who and what the author says they are: a man with a dream and a mountain that would seem to stand in the way of his dream. The story is simple. A man in India lives on one side of a mountain in a very poor village. On the other side of the mountain is a vibrant village, where the rain falls, crops grow, and townsfolk live without poverty. Their children attend school, and if sick, their village has a hospital.

Manjhi’s fellow villagers must walk up one side of the mountain and down the other to find work in other fields and markets. India’s caste system comes into play, and Manjhi’s caste is one in which he and his family are expected to live in such poverty. Manjhi does not dream of living on the other side of the mountain, but he would like to make it easier for those in his village to reach the village on the other side.  One day, something very simple but surprising happens that makes Manjhi think he might be able to make that happen. He will move the mountain! How can that be?

He will move the mountain, inch by inch, foot by foot, mile by mile. The mountain, made of earth and rocks, can be chipped and chiseled away. Churnin takes the reader year by year to see Manjhi’s dream become a possibility. The ridicule once rained upon him by his fellow villagers eventually becomes wholehearted support and by the 22nd year of work: “Swoosh! Where once a mighty mountain stood, there was nothing but open space and broken rocks.”

“Manjhi looked from one village to the other, but for the first time, there weren’t two villages. There was just one, sharing water, hopes, dreams . . . and a man who had moved a mountain!”

The surprise at the end of this story is that Manjhi is a real person, not a fictional character and his work has been recognized by the Indian government. Now his village has a school and a clinic. Popovici’s illustrations perfectly enhance Churnin’s story. The pictures fill the pages so that they are never separated from the text, and the soft wash of his watercolors mirror the slow and steady pace of Manjhi’s work.

Now for a strong thumbs-up for Creston Books, a relatively new publishing house in the San Francisco Bay Area. When shopping for children’s books, I cannot recommend a better place to start. Nancy Churnin’s book is a rather spectacular read for the whole family. It’s a perfect excuse to drag out that atlas and find Manjhi’s village Gehlaur, near Gaya in Bihar, India. Also, it’s a good time to talk about “others,” people who live far, far away from us, but have dreams just like we do. Our own “mountains” may not consist of dirt and stone, but we all have dreams that take time and effort. Most of us, children and grownups, know what it feels like to have people poke fun at us. The author’s notes at the end of the story offer the adult who will be reading the book some ideas to talk about when the story ends. The end of Manjhi Moves a Mountain can make a very good beginning.   –  Sunny Solomon 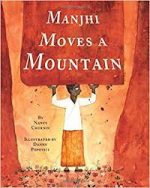 Sunny Solomon holds an MA in English/Creative Writing, San Francisco State University. She is a book reviewer for “The Clayton Pioneer” and her poetry and other writing has been published in literary journals, one chapbook, In the Company of Hope and the collection, Six Poets Sixty-six Poems. She was the happy manager of Bonanza Books, Clayton, CA and Clayton Books, Clayton, CA. She continues to moderate a thriving book club that survived the closure of the store from which it began. Sunny currently lives next to the Truckee in Reno, NV.
More from this reviewer
PrevTrainwreck
Rants from the HillNext