Home » Reviews » Rants from the Hill

Rants from the Hill 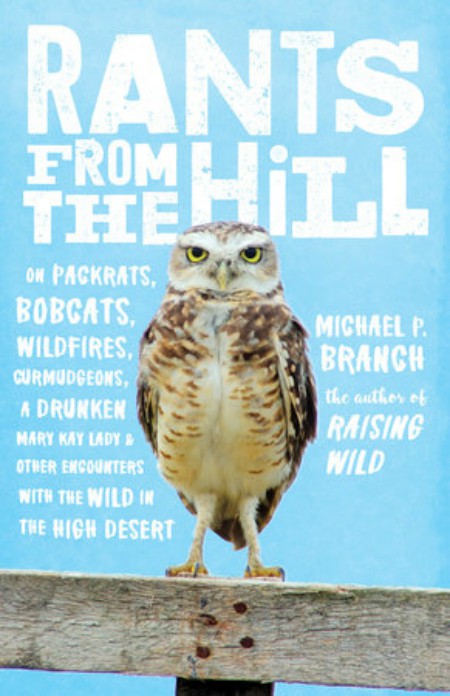 RANTS FROM THE HILL

In 2010, the High Country News editors asked Mike Branch to write a monthly column for its online edition. They asked for a fresh outlook, “in a voice and with an angle of vision that would add a new perspective to the magazine’s long-standing engagement of natural environments in the West.” Now Mike has polished and gathered together thirty-seven of those essays in Rants from the Hill. Rants? His rants are not tirades, but rather, in the classical sense of the word, are extravagant or hyperbolic self-expressions. Reading Rants is informative, often thought-provoking, and always downright fun.

I commented when I reviewed his last book of nature essays, for “Bookin’ with Sunny,” Raising Wild, that I’ve been friends with Mike for more than three decades. Rants from the Hill replicates his voice even more acutely, like an evening spent sitting alongside a campfire with Mike, sharing a glass or two of whiskey, pondering serious ideas about the American West past, present, and future, and then laughing uproariously while we toss back another shot. The subtitle of Mike’s new book perfectly distills the flavor: “On Packrats, Bobcats, Wildfires, Curmudgeons, a Drunken Mary Kay Lady & Other Encounters with the Wild in the High Desert.” (And no, I’m not the drunken Mary Kay lady!)

The range of Rants from the Hill is remarkable. Because Mike is an English professor, he shares literary allusions and parses prose and poetry alike. Some of his favorite writers are familiar, like William Wordsworth and Walt Whitman and Ralph Waldo Emerson, while others are more obscure, like W. S. Merwin and J. B. S. Haldane and Italo Calvino. Mike draws their words into his own, bringing ideas from previous centuries into contemporary times. Not all of Mike’s explication is deadly serious, however. One whole chapter, for example, produces an extended riff on bumper stickers. Its title? “I Brake for Rants.”

Mike also reveals an interest in etymology, investigating the origins of words by delving into the archaic meanings of “rant” or by placing “prospect” back into its original point of view. He relishes multiple word variations, like “dowsing,” “witching,” “divining,” or “doodlebugging. And, best of all, he explores the human nature of names. “Femailman,” “Chickenfeathers,” and the Branch family puppy “Beauregard,” who quickly morphs into “SLOWregard,” “LOWregard,” “BLOWregard,” and “BEAUtox.”

Like Raising Wild, Rants from the Hill also contains sheaves of information about the flora and fauna of the Great Basin. Some of the most arresting passages center on the wildlife Mike encounters. Removing bees from the attic? No problem for “Dan, Dan, the Big Bee Man.” Encountering a bobcat when clad only in lime green boxer shorts and wielding only a yellow flashlight? A great opportunity for an extended discussion about Lynx rufus and its feral cat cousins. Gooseberry deserves a paragraph or two, a desert mountain of sand merits an entire chapter, as does a desiccated playa. Mike’s family also plays a role in Rants from the Hill. His daughters make wondrous bucket lists, roll crazily down the aforesaid Sand Mountain, and happily transform a wood pile into an imitation ichthyosaur. His wife, Eryn, provides an overlay of good sense, but her sardonic sense of humor punctuates these narratives, too.

Sometimes, however, Mike’s essays assume a serious tone. He is always mindful of what living in the contemporary AmericanWest entails. Topics like the mindless consumption of gas, the frivolous release of helium balloons, the constant fear of wildfire, even the rotting Jeep carcass recycled as a packrat midden, remind the reader of how each of us is disturbing the environment just as the environment is affecting our lives. So Rants from the Hill lives up to its promise, offering an array of hyperbolic self-expressions that asks us to cogitate, to seriously muse about big ideas and to poke fun at little notions. – Ann Ronald 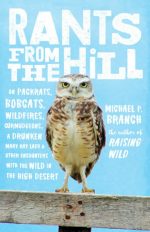 Ann Ronald is a retired English professor from the University of Nevada, Reno. Author of dozens of reviews, she’s also written a number of books about the American West. They include literary studies such as The New West of Edward Abby and Reader of the Purple Sage, cultural studies such as GhostWest and Oh, Give Me a Home, and nature writing such as Earthtones: A Nevada Album. Her latest is a work of fiction, Friendly Fallout 1953. Since retiring, she’s been reading vociferously, so “Bookin’ With Sunny” is giving her a wonderful opportunity to share thoughts about her favorite new discoveries.
More from this reviewer
PrevManjhi Moves a Mountain
What HappenedNext