Home » Reviews » The Word is Murder

The Word is Murder 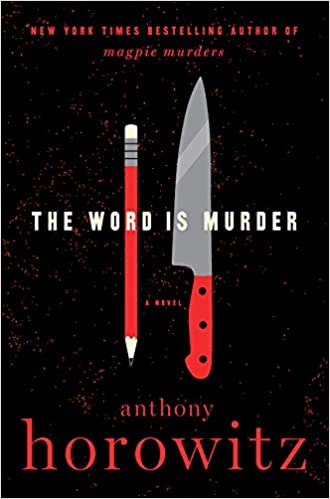 The Word is Murder – the author as a character? Horowitz muses about murder mystery writing and more.

When it comes to writing murder mysteries, Anthony Horowitz has a Sherlock Holmesian imagination. Magpie Murders, which I recently reviewed for “Bookin’ with Sunny,” features a novel within a novel. The Word Is Murder, which I just finished reading, features the author himself as a character writing a book about a detective solving a murder. Both of these unusual designs give Horowitz multiple opportunities to muse about the art of murder mystery writing, placing the reader inside the author’s literary imagination while at the same time putting the reader alongside the detective work necessary to solve some heinous crimes.

The Word Is Murder begins on the last day of Diana Cowper’s life. She goes to a funeral home to arrange her own burial; by nighttime she lies dead, strangled with a cord from the draperies in her living room. This enigmatic sequence of events seems much too coincidental. Daniel Hawthorne, an ex-police inspector, still consults with the police, and he has been asked to look into Mrs. Cowper’s murder. He also would like Anthony Horowitz to write about the investigation, to effectively serve as Hawthorne’s Dr. Watson.

Hawthorne indeed operates rather like Sherlock Holmes, using observation, logic, and ratiocination to put the pieces of the Cowper puzzle together. Just like a Sir Arthur Conan Doyle novel, The Word Is Murder drops subtle hints throughout its pages, leaving the reader and Watson/Horowitz to guess which clues are important and which are not. Horowitz finds Hawthorne frustrating. The two men met while Horowitz was writing a film script and needed Hawthorne’s expertise to verify police procedures, but they were never particularly friendly. Now they’re together constantly, as Horowitz notes every Hawthorne investigatory step. Horowitz finds the whole process greatly annoying, but I found the process amusing. In effect, Horowitz is writing an astute and funny riff on the detective/faithful sidekick relationship used by so many murder mystery writers. The mastermind detective who can see through the clues and finally solve the crime; the loyal associate who is always one step behind.

While Hawthorne and Horowitz are the characters who most interested me in The Word Is Murder, the supporting cast was intriguing, too. Horowitz has an eye for detailed motivations that helps his fictional men and women seem real. He also has a knack for adding tangential information, so the narrative line wanders down several diverse paths, some extremely relevant and some merely there to distract the reader into drawing mistaken conclusions. Like all effective murder mysteries, this one is filled with red herrings as well as crucial clues. Like all first-rate novels in this genre, The Word Is Murder unfolds deliciously. In writing this review, I find I don’t want to give away any of the plot or even name any of the characters and the parts they play. Instead, I want to leave the reader free to explore Hawthorne and Horowitz’s world, which is fiction even though Horowitz’s narrative voice pretends it’s real, without any preconceptions.

For those who are as intrigued by this novel’s design, there are two other chances to join the two Hs. Even their titles echo the gist of the first Hawthorne and Horowitz mystery: The Sentence Is Death and A Line to Kill. I look forward to reading them both, as I continue to think that Anthony Horowitz is one of today’s most inventive mystery writers. Anyone who loves the genre will happily relish his books, especially when he teases about the very genre he is parodying. – Ann Ronald 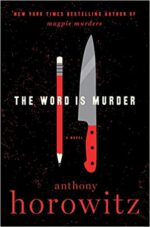 Ann Ronald is a retired English professor from the University of Nevada, Reno. Author of dozens of reviews, she’s also written a number of books about the American West. They include literary studies such as The New West of Edward Abby and Reader of the Purple Sage, cultural studies such as GhostWest and Oh, Give Me a Home, and nature writing such as Earthtones: A Nevada Album. Her latest is a work of fiction, Friendly Fallout 1953. Since retiring, she’s been reading vociferously, so “Bookin’ With Sunny” is giving her a wonderful opportunity to share thoughts about her favorite new discoveries.
More from this reviewer
PrevEl Deafo
The Girl Who Wrote in SilkNext