Home » Reviews » The Girl Who Wrote in Silk 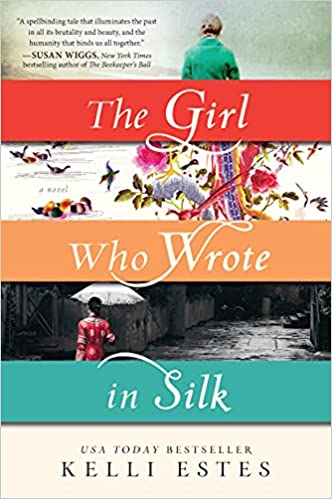 I have a soft spot in my heart for Orcas Island, the setting of Kelli Estes’ novel The Girl Who Wrote in Silk. When I was a youngster, my family vacationed there every summer. I remember that mid-twentieth-century Puget Sound setting as beautifully idyllic, more like the late nineteenth-century scenery that Estes describes than today’s over-populated tourist destination. Despite its picturesque scenery, however, Estes’ novel is anything but peaceful and serene. Instead, it lays bare an ugly chapter in Washington state history—its treatment of Chinese settlers and its efforts to drive them away from their homes.

As Estes reports in her Author’s Note, she doesn’t pretend that The Girl Who Wrote in Silk is strictly factual. Instead, she used her research findings to generate an ambiance true to the spirit of the times. In the 1880s, after the Chinese were no longer needed to build the railways, they were expelled from many Washington cities, though not from Seattle as Estes imagines. Her novel features a young woman violently rousted from her Seattle home. Through a series of disastrous circumstances, Mei Lien ends up on Orcas. There, she finds a new refuge, but she also encounters continued racism, distrust, distain, and dislike.

Paralleling Mei Lien’s tale is a present-day story of another young woman seeking her place in the world. From her aunt, Inara has inherited the family vacation home on Orcas Island. While checking out her new property, Inara discovers the carefully hidden embroidered sleeve of a Chinese robe, a sleeve figured with strange narrative shapes and patterns. Puzzled, she is determined to unearth the mystery of who so carefully stitched the sleeve and why, to figure out what the sleeve-maker was trying to say. This, then, is the pattern for The Girl Who Wrote in Silk. Estes alternates Mei Lien’s and Inara’s stories, switching back and forth from the historic 1880s to a twenty-first-century Seattle and Orcas Island. The reader learns many things about Mei Lien’s life that remain hidden from Inara. When the novel ends we know almost all of Mei Lien’s secrets while Inara can only guess at and extrapolate about some of them.

As I’ve stated before in “Bookin’ with Sunny,” I enjoy novels that move between centuries. I thought Kelli Estes utilized this narrative technique in exceptionally effective ways. The stunning scenery connects the dots, especially the saltwater beach that abuts the property where Mei Lien lived more than a hundred years before Inara. Both young women feel an affinity for what is now called the Salish Sea; both spend countless hours sitting beside the shore, alternately dreaming and fretting about their lives. Since I recall countless hours doing the same thing on Orcas Island, I genuinely appreciated how Estes packs the young women’s stories into a sense of place and lets the two resonate back and forth from one to the other.

I can’t imagine not falling in love with Estes’ characters, too. They each carry burdens that make the reader think as well as dote. Mei Lien, of course, exemplifies how Chinese people historically were so unfairly treated. Inara faces a different form of hostility—how might a young woman turn her inheritance into a boutique hotel, and how might she make peace with her own family’s complicated Orcas Island history. About the latter, I might add that The Girl Who Wrote in Silk seemed a bit too tidy at the end, the plot tied with a figurative bow that was a little too neat for me. That’s a minor complaint, however. Estes’ novel is, after all, a romance, a highly successful one that I thoroughly enjoyed.  –  Ann Ronald

Also available by Kelli Estes: Today We Go Home; The Cost of Courage 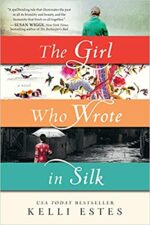 Ann Ronald is a retired English professor from the University of Nevada, Reno. Author of dozens of reviews, she’s also written a number of books about the American West. They include literary studies such as The New West of Edward Abby and Reader of the Purple Sage, cultural studies such as GhostWest and Oh, Give Me a Home, and nature writing such as Earthtones: A Nevada Album. Her latest is a work of fiction, Friendly Fallout 1953. Since retiring, she’s been reading vociferously, so “Bookin’ With Sunny” is giving her a wonderful opportunity to share thoughts about her favorite new discoveries.
More from this reviewer
PrevThe Word is Murder
When the Stars Go DarkNext