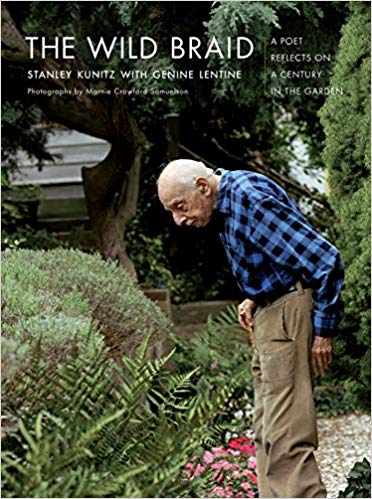 THE WILD BRAID: A POET REFLECTS ON A CENTURY IN THE GARDEN

Stanley Kunitz, U.S. Poet Laureate, one among his many honors, published The Wild Braid during his hundredth birthday year. That alone is a remarkable achievement, even with help.

The Wild Braid, part memoir but more meditation and poetry, is beguiling and nostalgic but never maudlin. It is a fierce testimonial to life but with no denial of death. As he writes, we are all a compost pile waiting to happen. To borrow from Freud. Braid is an anthem to Eros and Thanatos. His commitments to language, nature in general, and gardening, in particular, come with a clear-headedness that lured me like a trout to a well-cast dry fly or, better yet, a butterfly to a buddleia.

Kunitz lived the entirety of his 100+ years on the East Coast. Apparently, his love of both words and nature began early. Wherever he lived, he made and tended gardens. The place closest to his heart was a cottage and grounds that he purchased in Provincetown on Cape Cod before “the Cape” became the public refuge of the rich and famous. There he built and cultivated a tiered garden over four decades on land that had been previously unvegetated sand.

His gardening and his poetry are symbiotic. This book of essays, poetry, and conversations explores the interrelationships among gardening and poetry and life. Poetry and gardening are similar but, in Kunitz’s view, different in at least one essential way. A garden, once established, mostly comes back to life the same each Spring. The garden doesn’t have to be re-created each year, unlike a new poem. But both poetry and a garden, in Kunitz’s view, are a piece of tamed wilderness; yet, each must contain a bit of wildness. On pruning and poetry: “As with the making of a poem, so much of the effort is to get rid of all the excess, and at the same time be certain you are not ridding the poem of its essence . . . you must be very careful not to deprive the poem of its wild origin.” Nor the tree, presumably. Maintaining wildness requires observing a very fine line, hence the art involved in both gardening and poetry. For Kunitz, the result, in either case, ought not to be a cute little gumdrop bush or other topiary.

The Wild Braid (I won’t reveal the source of the title) too, is a meditation about aging and probably more appealing to someone like me, starting his fourth quarter, than someone just beginning their second. Like, Kunitz, I can remember Eros, but I am getting to know Thanatos. Kunitz is perhaps influenced more by 19th-century Romantic poetry than I. In one of his last poems, he compares himself to Orpheus who could talk to the animals in their own language:

I had that art, but now
I’ve waked into the separate
wilderness of age,
where the old, libidinous beasts
assume familiar shapes,
pretending to be tamed.

His views on the yin-yang relationship between life and death, while obviously not new, are expressed in such beautiful, thoughtful language that he gives “the cycle of life” a deeper, more poignant understanding. He has a great relish for life and its possibilities, a life lived (so far as I can determine) without regrets. His conversations with Genine Lentine, herself a poet, are charming, witty, and deeply personal as he contemplates the mysteries of life, gardening, and poetry, all compelled by his stated desire to be truthful. All of this is enhanced by the photography of Marnie Crawford Samuelson.

A word of explanation: I’m naïve when it comes to poetry. I neither read nor write it with any frequency. I came to this book as a gardener but decided to review it for other reasons.  – Neal Ferguson

Also available by Stanley Kunitz: The Testing Tree; The Later Poems; The Wellfleet Whale; Interviews and Encounters; The Long Boat; Collected Poems; The Poems of Stanley Kunitz. (Lots of his OP books can be found on the shelves of used books bookstores.)

Please support your local Independent Bookstores and your Public Library. 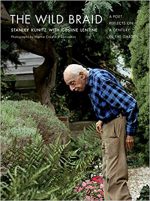 Neal Ferguson is a self described Anglo-phile. After studying for a PhD in British history and doing research for a year in various British archives, he came to the University of Nevada in 1970 to teach. Soon he found himself in administration where he remained until 2003. After returning to full-time teaching a decade ago, he decided to concentrate his teaching energies on Medieval British history and various global aspects of World War II. Dedicated to Ambrose Bierce’s proclamation that the purpose of war is to teach Americans geography, Neal insists that his students accompany him (in class) to sundry east European rivers and steppes, African deserts and jungles, south-east Asian mountain ranges and peninsulas, and small islands and coral reefs in the Pacific. Currently he is writing a book about the ups and downs of General Douglas MacArthur’s military reputation.
More from this reviewer
PrevTrespass; the Boundaries We Cross Unaware.
Mostly White, with Some ExceptionsNext