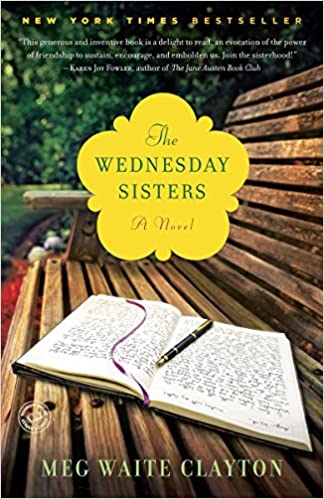 THE WEDNESDAY SISTERS – Meg Waite Clayton’s novel of a group of young women on the cusp of adulthood. The novel is filled with wisdom for both men and women.

Okay, gentlemen, step back; The Wednesday Sisters, by its title alone, would suggest that it is written solely for the female reader. When I first saw the title, I thought, oh no, not another group-hug-and-don’t-girls-make-the-best-friends book. But the girls of Meg Waite Clayton’s second novel become women, and I was wrong; this is a book that has as much to say to men as women.

The year is 1967. The place is Palo Alto, California. Five young wives have all happily accompanied their husbands west in pursuit of their husbands’ professional dreams. The five women meet almost randomly as they bring their children to play in Pardee Park, located within walking distance of each other’s homes. The women come from different social and economic backgrounds, but what they have in common is that none are from California, all are Caucasians, all love books, and each harbors a secret wish to be a published writer.

Early into their tentative friendship, the women agree to meet in the park every Wednesday, bringing whatever they’ve written in their journals. While their young children play, they read aloud, venture into the danger of words exposing their most hidden feelings.

Their shared wish to become writers is only the beginning. This novel is a story of secrets and what it takes to build sufficient trust to reveal them. One of the women, Brett, wears white gloves everywhere and always. The gloves come to represent all their secrets. Brett’s secret is the last to be told, and it is as startling as it is sad.

The story is told in Frankie (Mary Frances) O’Mara’s voice, and oh, my, will it resonate with many readers.  She tells us that by the time she came to the Bay Area, she had “already settled into the life I’d been raised to settle into: dependable daughter, good wife, attentive mother. All the Wednesday Sisters had.”

Clayton’s book moves beyond the familiar story of women befriending women, although that is exactly what takes place. I found more than that in my reading. These five women, Frankie, Brett, Linda, Kath, and Ally, in the course of their friendship, become mature, wise, and finally, more fully developed women who are prepared to step into the world in ways their mothers could not have imagined; or maybe imagined, but could never speak of. As they write and share their stories, they begin to open as much to themselves as to one another.

Clayton’s five “Sisters” are not daughters of radical, forward-thinking, liberal parents.  What makes this story meaningful is the chance to look more closely at how these women slowly come into their own. They are funny, bright, and brave in their own company, but when it comes to women’s rights or marching against the Vietnam War, they are timid and unsure of exactly what they believe.

They grow through their writing and reading, but it doesn’t come easily. Clayton’s inclusion of issues like the foreboding antiwar movement, women’s rights, racial prejudice, infidelity, fear of cancer, infertility is not window dressing giving her story a sense of historical reality. The Wednesday Sisters struggle with these issues. They take part in public demonstrations, and in a most personal way, must face their racial feelings when they find out Ally’s husband is from India and is as dark as any black man. Clayton gives depth to the women’s inability to know exactly how to reach out and comfort one another when infidelity, infertility, and cancer settles into their circle.

Clayton’s novel reminds us of what change looked like in those years. There was no great awakening for these women as there would be just ten years later, at the height of the antiwar movement, the rebirth of feminism. The older reader will be touched deeply by Clayton’s novel. It is filled with funny and often painful reminders of what we who grew up in those years experienced. To the younger women who read it, and they should, I say welcome to the journey taken by your mothers and grandmothers not so long ago, but already so distant.

I read The Wednesday Sisters back in 2008 and published a shorter version of this review in the Concord Clayton Pioneer when the book first came out. That review slipped through the cracks and never appeared in Bookin’ with Sunny until I spotted it in my archives just the other day.

In 2008, the author lived in the San Francisco Bay Area, and my bookstore was lucky enough to have Meg Waite Clayton as a featured guest. As I think back on that evening, I wonder what questions we might have asked her today. Would her “Sisters” have marched for BLM? Would they support LGBT? How many might have divorced? As much as it is exciting to read novels centered on what is happening today, maybe this very minute, if we look back to a novel whose events took place only fifty years ago, we might be surprised at how those stories continue to resonate. Maturity’s important lessons come from the journey, not the destination.  –  Sunny Solomon

Also available by Meg Waite Clayton: Beautiful Exiles; The Race for Paris; The Language of Light; The Wednesday Daughters; The Four Mrs. Bradwells 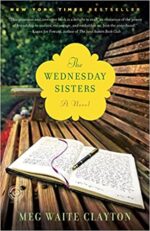 Sunny Solomon holds an MA in English/Creative Writing, San Francisco State University. She is a book reviewer for “The Clayton Pioneer” and her poetry and other writing has been published in literary journals, one chapbook, In the Company of Hope and the collection, Six Poets Sixty-six Poems. She was the happy manager of Bonanza Books, Clayton, CA and Clayton Books, Clayton, CA. She continues to moderate a thriving book club that survived the closure of the store from which it began. Sunny currently lives next to the Truckee in Reno, NV.
More from this reviewer
PrevBel Canto
A Baby’s BonesNext