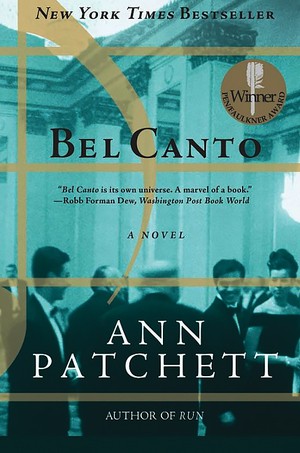 Ann Patchett’s highly-regarded 2001 novel, Bel Canto, was a finalist for the National Book Critics Circle Award, won the Orange Prize, and won the Penn/Faulkner Award. Now that I’ve read the narrative myself, I certainly see why this most creative piece of writing was given so many accolades. Bel Canto is one of those novels that reverberates in the imagination, sings to the intellect, and echoes in the heart. I whole-heartedly concur with the San Francisco Chronicle’s assessment, “A strange, terrific, spell-casting story,” and I most enthusiastically recommend Bel Canto to any “Bookin’ with Sunny” reader who hasn’t yet discovered its magic.

The set-up is unique. Patchett’s novel opens with a sumptuous birthday party thrown by an unnamed South American government to honor a Japanese businessman, hoping that he might invest in their impoverished country. Mr. Katsumi Hosokawa is an opera aficionado. Highlighting his birthday festivities will be the voice of his favorite soprano, Roxanne Coss, who has been paid a great deal of money to appear in person and sing arias he loves. On the last note of the one he treasures most, from Anton Dvorak’s Rusalka, the lights go out, plunging the hosting Vice President’s exquisite mansion into total darkness.

When the lights come back on, the dinner guests are surrounded by terrorists. Intending to kidnap the country’s President and make a quick getaway, the ragtag band is confounded by the fact that at the last minute the leader of the country chose not to attend the party. The young ruffians and their three commanding generals have captured only the Vice President, his guests, and an assortment of staff. Holding two hundred and twenty-two unwanted hostages, the terrorists must decide what to do next.

This is the core of Bel Canto. Denied their goal, to abscond with the President, what will the terrorists choose to demand instead? More important, how will they treat their captives? And what might be the absent President’s response? The answers lie entirely inside the mansion. Patchett keeps her focus on the frightened men and women, dressed in formalwear and cowering on the ballroom floor, and on their equally unsettled captors, whose amateurish behavior is unpredictably terrifying. Bel Canto never exits the confines of the palatial edifice, never leaves the psyches of the captives and their guards. The result is a psychological tension that increases with every day, with every incident on every page.

Near the end of the novel, one of the characters remarks, “It makes you wonder. All the brilliant things we might have done with our lives if only we suspected we knew how.” Patchett’s surreal tale opens up the confines of her character’s lives. Bel Canto treats its readers to the translator, for example, who has tiptoed in and out of lives and conversations without ever exploring his own feelings and needs. Or Mr. Hosokawa, who has been so career-driven that he has never taken time for himself. Or his computer executive who secretly plays the piano well enough to accompany Miss Coss, much to the thrill of the other captives. Or the Frenchman, who has always enjoyed fine cuisine but never tried cooking himself. Or the Vice President, who suddenly escapes the President’s shadow. Or the terrorist with a voice potentially as fine as Roxanne’s. Or the terrorist who learns chess by observing the generals and Mr. Hosokawa. Or the one who studies Spanish with the translator, and more. The list is endless as Patchett delves into the depths of these very human, human beings and their unforeseen possibilities.

Flooding the pages, too, is the recurrent music. Composers, arias, Roxanne Coss’s magnificent voice practicing scales with an untutored terrorist lad, singing solos that take her listeners into settings and scenes in distant countries they can only imagine. Music, setting free the captives and captors alike, while they remain physically fortressed, able to escape only in “beautiful music,” Bel Canto, the finest symphony in words that I’ve read in a very long time. – Ann Ronald

Also available by Ann Patchett: The Dutch House; Lambslide; Nashville; Commonwealth; This Is The Story of a Happy Marriage; State of Wonder; What Now; Run; Truth & Beauty, A Friendship; The Magician’s Assistant; Taft; The Patron Saint of Liars; The All of It; 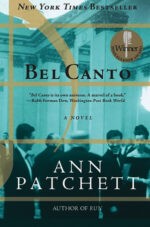 Ann Ronald is a retired English professor from the University of Nevada, Reno. Author of dozens of reviews, she’s also written a number of books about the American West. They include literary studies such as The New West of Edward Abby and Reader of the Purple Sage, cultural studies such as GhostWest and Oh, Give Me a Home, and nature writing such as Earthtones: A Nevada Album. Her latest is a work of fiction, Friendly Fallout 1953. Since retiring, she’s been reading vociferously, so “Bookin’ With Sunny” is giving her a wonderful opportunity to share thoughts about her favorite new discoveries.
More from this reviewer
PrevDemagogue, The Life and Long Shadow of Senator Joe McCarthy
The Wednesday SistersNext