Demagogue, The Life and Long Shadow of Senator Joe McCarthy 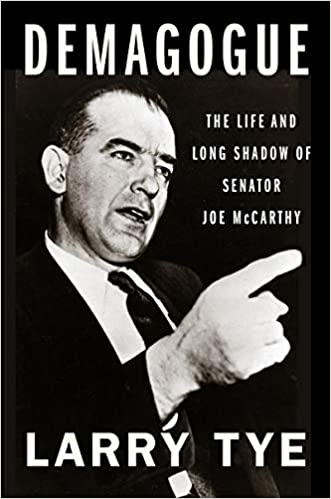 DEMAGOGUE, THE LIFE AND LONG SHADOW OF SENATOR JOE MCCARTHY

One of my first memories of TV occurred during the summer of 1954 when I watched Senator Joe McCarthy conduct one of his famously brutal “find the Commie in a haystack” investigations as Chairman of the U.S. Senate’s Permanent Investigation Sub-Committee.  I was eleven; we had just gotten our first TV.  I was more absorbed by the thrill of watching TV during the day while my parents were at work than I was by the demagogic assault on democracy being played out in our living room.  I write this now with some smug sense of superiority (how naïve Americans were in 1954) but must emphasize that a majority of Americans were supportive of Senator McCarthy’s aim (root out domestic Communists and sympathizers from all of our public institutions) but were only slightly repulsed by his humiliating tactics and trampling on the Bill of Rights.

As Larry Tye amply demonstrates, Joe McCarthy was completely undaunted by law, customs, scruples, or common decency.  At the same time, he was energetic, a tireless worker, a brilliant campaigner, witty, charismatic, a skirt chaser, and a loyal friend.  In today’s jargon, he was a narcissistic sociopath concerned only with becoming famous and influential by getting daily coverage from the nation’s newspapers.  As detailed in Demagogue, he dramatically embellished his World War II combat record; went off to fight while retaining his judgeship in Wisconsin state; ran for the U.S. Senate while he was still a military officer (illegal) and still a judge (illegal in Wisconsin); and defeated his primary opponent and incumbent Wisconsin senator with lies and innuendo (not a first in American politics).  As a junior, freshman Senator from Wisconsin in 1946, but before he officially took his seat, he became many reporters’ go-to source by making unfounded but colorful, quotable allegations about those responsible for U.S. trade policy. His Anti-Communism was nowhere in evidence initially. Fortuitously for his fame and influence, he discovered that by conjuring and attacking Communists in the U.S. State Department ( his famous, bogus list of 200 spies that he waved around during various speeches) and by making an alliance with FBI director J. Edgar Hoover that he could garner almost unlimited press and TV coverage.  His stratospheric ascent began in 1946 and did not end until the summer of 1954.  His downfall was as absorbing and unlikely as his rise.

Those of you not familiar with Joe McCarthy and McCarthyism may be intrigued to discover that author Larry Tye draws a straight line from McCarthy to Trump.  According to Tye,  “Joe McCarthy’s most apt student was Donald Trump.  Roy Cohn was the flesh-and-blood nexus between the senator and the president.  An aging Cohn taught the fledgling Trump the transcendent lessons he had learned from his master, McCarthy—how to smear opponents and contrive grand conspiracies.” (476) This came as a revelation to me. If ever I had known, I had forgotten that McCarthy’s chief gunslinger became Trump’s tutor.  Interestingly, the author provides considerable evidence that Cohn had become the power behind the throne by the time McCarthy was at his most persuasive with the American people (early 1954).  Who was the creature, and who was the creator? Subsequent to 1954, Roy Cohn would be disbarred and sanctioned for his illegal and unethical actions. Phoenix-like he would rise (but not very high) from the ashy muck to be one of Trump’s chief advisors.

One of the sub-themes in Larry Tye’s exquisitely researched biography is that we  Americans have an occasional propensity to value and exalt the creatures who lurk in the nation’s shadows.  In the light of day, we loudly proclaim freedom, equality, and justice.  In the dark, we find the KKK, Know-Nothings, Jim Crow, the Red Scare, Father Coughlin, Huey Long, Japanese internment camps, HUAC, Joe McCarthy, and Donald Trump, to name a few.  As Tye argues convincingly, McCarthy tapped into fears already present and ready to be exploited in post-World War II American society.  Additionally, and despite Roy Cohn being a gay Jew, anti-Semitism and homophobia were avatars for Communists in McCarthy’s world-view.  How could McCarthy embrace a gay Jew as his alter-ego?  Simply, he was an unabashed hypocrite without scruple or fixed belief (except for Catholicism).

Larry Tye gives McCarthy his due and includes extensive commentary from Joe’s supporters.  In the end, however, Tye regards McCarthy’s impact on American culture up to the present day as tragic. An absorbing but scary read. – Neal Ferguson

Also available by Larry Tye: Bobby Kennedy, The making of a liberal Icon; Superman, The High-Flying History of America’s Most Enduring Hero; Rising from the Rail; Home Lands; The Father of Spin; Satchel, The Life and Times of an American Legend; Shock (with Kitty Dukakis) 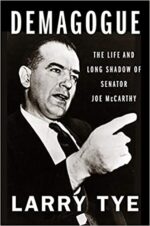 Neal Ferguson is a self described Anglo-phile. After studying for a PhD in British history and doing research for a year in various British archives, he came to the University of Nevada in 1970 to teach. Soon he found himself in administration where he remained until 2003. After returning to full-time teaching a decade ago, he decided to concentrate his teaching energies on Medieval British history and various global aspects of World War II. Dedicated to Ambrose Bierce’s proclamation that the purpose of war is to teach Americans geography, Neal insists that his students accompany him (in class) to sundry east European rivers and steppes, African deserts and jungles, south-east Asian mountain ranges and peninsulas, and small islands and coral reefs in the Pacific. Currently he is writing a book about the ups and downs of General Douglas MacArthur’s military reputation.
More from this reviewer
PrevMiss Garnet’s Angel/The City of Fallen Angels
Bel CantoNext