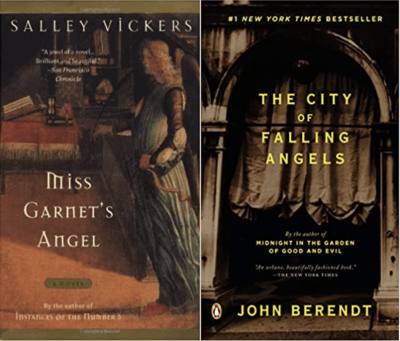 MISS GARNET’S ANGEL and THE CITY OF FALLEN ANGELS

Since the coronavirus has curtailed travel this year, books must take us to new and different destinations. I recently spent several days in Venice, first reading Salley Vickers’ novel, Miss Garnet’s Angel, and then John Berendt’s nonfiction portrait, The City of Falling Angels. Together, the two books magically brought the mystique of the city to life, pulling me far from home and propelling me through the miasma that is Venice.

Each book features someone—Miss Julia Garnet and John Berendt—who arrives in Venice mid-winter, hoping to experience a city populated by locals rather than tourists. Both take lodging in a Venetian home rather than a hotel, and both begin to explore their surroundings by walking endlessly along twisted streets and across arched and aged bridges. Both individuals, and this is key to the success of both books, are interested not only in the art and architecture of Venice but also in the people. Both pursue in-depth conversations with a wide array of local citizens and long-time expatriates who know the city well. If these books are travelogues of a sort, they are populated with genuinely knowledgeable and stimulating characters.

Miss Garnet is a sixty-year-old British woman on her own. Following the death of a friend, she realizes her own life has been lifeless and chooses Venice for a change of scene. Unlike her West London existence, Miss Garnet determines to talk to other people and to embrace experiences more fully than she ever has before, to become personable Julia rather than the stand-offish spinster Miss Garnet. Julia’s transformation lies at the heart of Miss Garnet’s Angel, and Venice is responsible for much of her growth. She visits churches and museums and revels in the local color. She goes to concerts, listens to music unlike any she has heard before. By the end of the novel, Julia is embracing friends and scenery alike. Venice deserves the credit.

John Berendt goes to Venice for a brief stay that coincides with the 1996 fire that destroyed the Gran Teatro La Fenice, a renowned Venetian opera house built in the eighteenth century. Fascinated by the citizens’ reactions, Berendt decides to stay awhile and investigate further. His narrative, The City of Fallen Angels, explores not only the fire itself and its aftermath but also the attitudes of the men and women involved in Save Venice projects that are keeping the city and its aged architecture above water and in half-way decent repair. With a knack for enlivening eccentric personalities, Berendt introduces two camps of antiquarians—those who relish the philanthropic limelight and those who work behind the scenes. Near the beginning of the book, someone tells him, “Venetians never tell the truth. We mean precisely the opposite of what we say.” Whether Berendt is navigating the philanthropic biases or the maze of Fenice fire responsibility, he (joined by the reader) seeks the uncertain truth.

Since both books refer to angels in their titles, I expected an echoing refrain. Berendt’s angels are the crumbling ones that fall in pieces from decaying buildings. He does not point to any particular angel, just the ambiance of what once was glorious and now has fallen into historic disrepair. Salley Vickers’ angel is much more emblematic. A sculpture of the angel Raphael overlooks Miss Garnet’s first Venetian dwelling, and his figure becomes a touchstone for Julia. Not only does she find his presence on the streets of Venice, but he bears an ancient Jewish narrative in parallel to her contemporary journey. Her angel is more a rising than Berendt’s falling star.

Do I know Venice better than I had imagined the city before? I think so. I was especially charmed by the terrain, the sounds of a city without vehicles, the connective canals. I’ve not been to Venice, so I could only picture through these two author’s pictorial words. Julia, inside St. Mark’s Cathedral, where “light played and danced from a million tiny surfaces of refracted gold.” Berendt, eying “a city of domes and bell towers, floating hazily in the distance, topped here and there by a marble saint or a gilded angel.” Always, an angel rising and falling in Venice.  –  Ann Ronald

Also available by Sally Vickers: Instances of the Number 3; Mr. Golightly’s Holiday; The Other Side of You; Where Three Roads Meet; Dancing Backwards. Fourth Estate; Aphrodite’s Hat; The Cleaner of Chartres; Cousins; The Librarian; The Boy Who Could See Death; Cousins; Grandmothers.

Also available by John Berendt: My Baby Blue Jays; Midnight in the Garden of Good and Evil.

Ann Ronald is a retired English professor from the University of Nevada, Reno. Author of dozens of reviews, she’s also written a number of books about the American West. They include literary studies such as The New West of Edward Abby and Reader of the Purple Sage, cultural studies such as GhostWest and Oh, Give Me a Home, and nature writing such as Earthtones: A Nevada Album. Her latest is a work of fiction, Friendly Fallout 1953. Since retiring, she’s been reading vociferously, so “Bookin’ With Sunny” is giving her a wonderful opportunity to share thoughts about her favorite new discoveries.
More from this reviewer
PrevWill You Be My Friend
Demagogue, The Life and Long Shadow of Senator Joe McCarthyNext