Home » Reviews » The Cleaner of Chartres

The Cleaner of Chartres 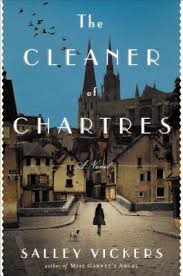 The Cleaner of Chartres

The prosaic title of Salley Vickers’s new novel, The Cleaner of Chartres, belies the subtle complexities of her story. On a literal level, illiterate Agnes Morel is a simple, thirty-five-year-old cleaning lady who “mopped, dusted and polished her way round the cathedral.” Abandoned at birth, found in a basket, and then raised in a convent, Agnes’s past is a morass of mental problems and interpersonal difficulties. Her arrival at Chartres is cloaked in strangeness, too, although she soon finds useful work with various families in the surrounding community. Frequent flashbacks fill in the blanks of Agnes’s past, but the heart of The Cleaner of Chartres actually moves from the present to the future, and begins only after the Chartres dean, Father Paul, hires Agnes to clean the cathedral for a few hours every day.

Other people notice her dedication, and soon Agnes is cleaning houses as well as Chartres. She cleans for Father Paul, for assorted elderly townswomen, for a painter, and for an aging professor. More figuratively, she is bringing a cleansing level of sweetness and light to everyone she meets. In a way, she cleanses souls. Agnes’s present life is not without difficulties, for her past extends its tentacles, but those who value her today work hard to thwart the past that hounds her and those gossips who would destroy her.

The author, Salley Vickers, was trained as a Jungian psychotherapist, and this fact lends another dimension to The Cleaner of Chartres. Vickers tightly finesses the ways that nuns, priests, psychiatrists, policemen and even her cleaning customers interact with Agnes. A wide array of treatment and mistreatment ensues. I can’t be more specific without giving away too much of the plot, but this overlay of legal and medical intrusion and confusion adds psychological depth to otherwise mundane events. Suffice to say that one doctor early on believes “in the therapeutic virtues of trust and respect” and has “faith in nature and the remedial power of hope.” Father Paul, years later, would strongly agree.

Agnes is particularly fascinated by the famous, and mysterious labyrinth on the floor of the Chartres cathedral. Whenever she cleans it, she does so by following the pattern from start to finish. Vickers carefully notes the difference between a labyrinth and a maze—the former a circuitous route that steadily leads to the center, the latter a pathway with false options and devious dead ends. The Cleaner of Chartres itself appears to be a maze but turns out to be a labyrinth, one that circles around and around the facts and fantasies of Agnes’s life. It is up to the reader to discern the truths of Agnes’s existence and to evaluate her foibles fairly. At the same time, many characters in the novel come to appreciate Agnes’s strengths as well. Characters and readers alike arrive together at the center of her being.

The Cleaner of Chartres is a novel where sadness and hope intertwine. Each of the characters is a bit odd, even eccentric, and many of the actions are peculiar, too. Agnes herself is quite enigmatic and a bit of a puzzle. Yet the book fits together neatly, not in a box with a simple solution, but patterned, a labyrinth where “truth and respect” lead cleanly to “the remedial power of hope.”         – Ann Ronald

Also available by Vickers: Miss Garnet’s Angel; Where the Roads Meet; Mr. Golightly’s Holiday; Dancing Backwards; The Other Side of You; Aphrodite’s Hat.

Ann Ronald is a retired English professor from the University of Nevada, Reno. Author of dozens of reviews, she’s also written a number of books about the American West. They include literary studies such as The New West of Edward Abby and Reader of the Purple Sage, cultural studies such as GhostWest and Oh, Give Me a Home, and nature writing such as Earthtones: A Nevada Album. Her latest is a work of fiction, Friendly Fallout 1953. Since retiring, she’s been reading vociferously, so “Bookin’ With Sunny” is giving her a wonderful opportunity to share thoughts about her favorite new discoveries.
More from this reviewer
PrevEmbers of War
Istanbul PassageNext