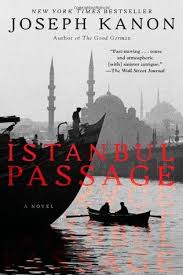 For Joseph Kanon, 1945 was a pivotal year, a time when world powers were transitioning into what would become the gray shadows of the cold war. Each of Kanon’s novels is set in 1945, although each takes place in a different part of the globe: Los Alamos, Berlin, Venice, Los Angeles, and now, Istanbul. Each book explores a setting where national interests and networks of spies coalesce and conflict with one another, and each story is rife with intrigue and innuendo. Each of Kanon’s novels stands alone, with singular characters and plots, but all together they depict a layered landscape, where associations and affinities and allegiances are constantly shifting.

Turkey, in 1945, is a country seeking its own autonomy and distancing itself from the postwar forces of Great Britain, the United States, and Russia. Istanbul Passage opens when an expatriate American agrees to help transfer a turncoat from one imperial agency to another. Who the man might be, why his expertise is so valuable, and what ethnic atrocities he may have committed are vague, as are the details of the American’s exact assignment. Even the turncoat’s national origin is unclear, as is his destination. Leon Bauer is just the middle man. When the momentary transfer erupts in gunfire, Leon is left to rearrange the chaos, and thus the plot of Istanbul Passage unfolds.

Kanon chooses to tell the story mainly through dialogue. Just as we communicate verbally with our friends and colleagues, so his characters converse on every page. Leon Bauer talks exclusively, with very little authorial intrusion or external commentary. We hear him speaking with other members of the various espionage communities, with friends and with foes, with acquaintances and with lovers. The reader must fill in the blanks between the words. Istanbul is important as background, while the Bosphorus serves as both barrier and passage, but the important links are verbal ones. The reader must pay close attention.

The reader also must pay close attention to the subtle shifts in tenor and tone. People are not who they seem to be, and what they say is often false or misleading. Only the final pages reveal the truth, and even then the truth is somewhat obfuscated. I liked Istanbul Passage a lot, because nothing turned out to be exactly as it first appeared to be. Only Leon is reliable, or so we assume, yet even his straightforward interpretations of people and events can be mistaken. His world lies in shadows, where good and evil blur in the night. Those he trusts may become untrustworthy; those he questions may not be false after all. The plot moves by misdirection, and of course by convoluted conversations. Reading a novel like Istanbul Passage is a little like trying to move forward through intellectual quicksand. Progression is possible only through random fits and starts.

Anyone who likes spy thrillers will love this book, with one caveat. Occasional moments of action, of gunfire and violent confrontation, occur, but most of the story takes place inside the characters’ heads. Istanbul Passage is more psychological than physical, more cerebral than actionable. Kanon, like John LeCarre, gets inside the brain—Leon’s brain, his associates’ brains, the reader’s brain. Quite honestly, my mind is still spinning from the final page.    – Ann Ronald

Ann Ronald is a retired English professor from the University of Nevada, Reno. Author of dozens of reviews, she’s also written a number of books about the American West. They include literary studies such as The New West of Edward Abby and Reader of the Purple Sage, cultural studies such as GhostWest and Oh, Give Me a Home, and nature writing such as Earthtones: A Nevada Album. Her latest is a work of fiction, Friendly Fallout 1953. Since retiring, she’s been reading vociferously, so “Bookin’ With Sunny” is giving her a wonderful opportunity to share thoughts about her favorite new discoveries.
More from this reviewer
PrevThe Cleaner of Chartres
Queen HereafterNext