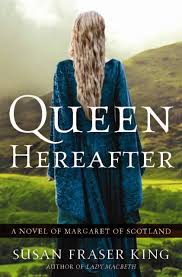 Queen Hereafter – A Novel of Margaret of Scotland

Early Scottish history has always seemed murky to me, with a great deal of violence and changing allegiances and a blur of Celtic names. Susan Fraser King attempts to clarify the Middle Ages morass, first with a novel titled Lady Macbeth and now with another, Queen Hereafter. The former, which I have not read, turns Lady Macbeth (known as Gruadh) into a sympathetic figure who values her Highland home and heritage above all. She plays an admirable role in Queen Hereafter, too, no longer a vibrant warrior queen but still very much attuned to Scotland, past and future.

King’s focus in this second historical novel is on Malcolm Canmore, the fierce fighter who killed Macbeth and the man who now is attempting to consolidate his Scottish holdings. Part of that process is to pillage and raid, part of it is to marry appropriately. He chooses Margaret for his bride. A Saxon princess who has been exiled along with her brother when William conquered England in the late 11th century, she brings both a substantial dowry and a personality that Malcolm needs. Where he is all rough edges, she is more cultured and refined. Queen Margaret’s task is to turn the heathens (my word, not King’s) into chivalric men and genteel women fit for polite society.

An Anglo-Dane who was Margaret’s confessor, Bishop Turgot, actually wrote a personal memoir, Vita S. Margaretae, about his medieval friend, so a surprising amount of information exists about the young queen’s life. She was exceedingly pious, spending hours every day in prayer and fasting excessively. She was generous, especially to children, giving away alms and treasure while trying to better the lives of the poor. She and Malcolm saw the births of eight healthy children who themselves went on to become Scottish royalty or to marry into other royal families. Robert Bruce, the Stuarts, and Mary Queen of Scots were among their descendants.

Susan Fraser King wisely chooses not to tell Margaret’s story from start to finish. Rather, she opts to narrate a slice of Margaret’s life, from the moment she and her family were shipwrecked off the coast of Scotland until the birth of her third son. In order to shape her novel, King adds a fictional dimension to the known facts of Margaret’s life. She creates a character named Eva, a granddaughter of Gruadh. Eva is ensconced in Malcolm’s household as a hostage to keep her grandmother at bay, and to serve both as a bard and as a trusted companion for Margaret. Secretly, however, Eva is also her grandmother’s spy, passing along information about the warfare and military tactics along the ever-changing Scottish-Saxon border.

Eva’s presence gives King another set of eyes through which to view Margaret’s and Malcolm’s actions. When the queen’s piety is overbearing, Eva brings reality and levity to the scene. When Malcolm instinctively wants to rewrite Scottish history in his own image, Eva is there to correct his omissions and misinterpretations. This additional point of view works extremely well, lending both balance and credence to the tale. And for those of us who love history as well as imaginative creations, an Author’s Note clearly explains what aspects of Queen Hereafter are based on the written record and what events and encounters are wholly fictional. For me, this effective blending is characteristic of all the best historical fiction, and Susan Fraser King well deserves the reader’s applause. Her novel is simply excellent.                     – Ann Ronald

Ann Ronald is a retired English professor from the University of Nevada, Reno. Author of dozens of reviews, she’s also written a number of books about the American West. They include literary studies such as The New West of Edward Abby and Reader of the Purple Sage, cultural studies such as GhostWest and Oh, Give Me a Home, and nature writing such as Earthtones: A Nevada Album. Her latest is a work of fiction, Friendly Fallout 1953. Since retiring, she’s been reading vociferously, so “Bookin’ With Sunny” is giving her a wonderful opportunity to share thoughts about her favorite new discoveries.
More from this reviewer
PrevIstanbul Passage
One Glorious AmbitionNext