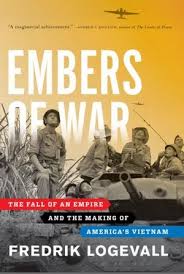 Embers of War: The Fall of an Empire and the Making of America’s Vietnam

A common observation is that “victors” write history. To say this cliché is perverse or worse is to give it more credence than it deserves. France and America both lost wars to Vietnam in the thirty-year span from 1945-75. Yet, French and American historians of these events have outnumbered their Vietnamese counterparts (the winners) by several orders of magnitude. To put Fredrik Logevall in either of these camps would be an injustice. He was born in Sweden, grew up in Canada, and educated in Canada and the U.S. He now teaches at Cornell University and lectures internationally. Embers of War, winner of the 2013 Pulitzer Prize in history, views these events through the eyes of the French, Vietnamese, and Americans.

Logevall in Embers of War ends his marvelously researched and presented narrative in 1959. On one level, it is the backstory to America’s later overt but undeclared war in Vietnam. This is helpful because so often the American war in Vietnam seems to have begun begin with the Gulf of Tonkin Resolution in 1964. In Logevall’s reckoning, our involvement began about twenty years before that. Embers of War closes the door on the French phase, the First Indo-Chinese War. It also captures the evolution, or one might say degeneration, of America’s role from 1945 onwards. The year 1959 is a convenient time to stop, before the embers are oxygenated into full conflagration. In 1959, two American officers, while watching a movie, were killed by Viet Cong infiltrators. Officers Ovnand and Buis are the first two names inscribed on the black wall of the Vietnam Memorial.

Embers of War is both compelling and dismaying. A complete story as is, it does not have to be regarded as a prologue to anything. Logevall includes intriguing personalities such as Ho Chi Minh, Georges Thierry, Vo Nguyen Giap, Bernard Fall, Bao Dai, all of whom interacted with the likes of FDR, Truman, de Gaulle, John Foster Dulles and other world leaders. These figures are clearly set within a milieu that begins simply enough. At the end of World War II, U.S. policy in Asia seemed to be on the side of liberation from the Japanese and also opposed to any revived colonialism, whether French or British. From that perspective Ho Chi Minh could be viewed as a nationalist trying to free his people from the Japanese, French post-war control, and Chinese or Soviet overlordship.

Then, in 1945, the tsunami crashed ashore and the French insisted on reasserting their control over Indochina. Ho Chi Minh decided to change the object of his armed resistance from the Japanese to the French. Insisting that he was anti-colonial, Truman and his advisors began, nevertheless, to put French colonial interests ahead of liberation because of the perceived need to prop up the French as part of America’s Cold War strategy. Ho Chi Minh moved from regarding the U.S. as a beacon of liberty to a bastion of hypocrisy. American rhetoric expanded to include the domino theory. The fall of China to Communism might lead to the fall of South East Asia. Then the Middle East, Australia, and perhaps Africa might fall, all falls being orchestrated by the Kremlin. Thus was the Vietnam imbroglio internationalized, and thus did America’s domestic fear of Communist dupes such as General George Marshall contaminate and distort American foreign policy.

As presented by Logevall, the story is complicated. He doesn’t attempt to simplify it. He allows the Viet Minh (League for the Independence of Vietnam) the French, and the Americans to speak and act for themselves. In this way, Logevall is able to lead the reader through the various levels of Hell that Vietnam became. We Americans did not simply take up where the French left off. Our tragedy was that we believed we could do it differently, better, but Bernard Fall, America’s first historian of Vietnam, wrote before his death in 1967: Americans were “dreaming different dreams than the French but walking in the same footsteps.” A chilling epitaph.     – Neal Ferguson

Also available by Logevall: Choosing War; America’s Cold War, The Politics of Insecurity; The Origins of the Vietnam War; Terrorism and 9/11; and co-authored available titles: A People and a Nation; Nixon in the World; The First Vietnam War, Colonial Conflict and Cold War Crisis.

Neal Ferguson is a self described Anglo-phile. After studying for a PhD in British history and doing research for a year in various British archives, he came to the University of Nevada in 1970 to teach. Soon he found himself in administration where he remained until 2003. After returning to full-time teaching a decade ago, he decided to concentrate his teaching energies on Medieval British history and various global aspects of World War II. Dedicated to Ambrose Bierce’s proclamation that the purpose of war is to teach Americans geography, Neal insists that his students accompany him (in class) to sundry east European rivers and steppes, African deserts and jungles, south-east Asian mountain ranges and peninsulas, and small islands and coral reefs in the Pacific. Currently he is writing a book about the ups and downs of General Douglas MacArthur’s military reputation.
More from this reviewer
PrevThe Bohemians
The Cleaner of ChartresNext