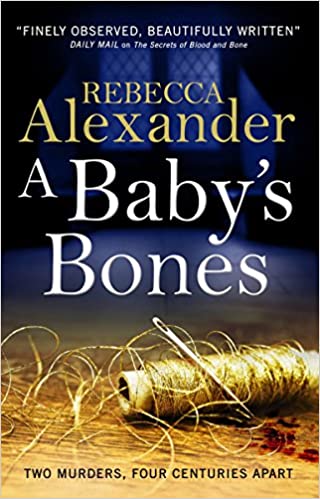 The plot of Rebecca Alexander’s novel, A Baby’s Bones, may sound familiar. An archaeological excavation on the Isle of Wight has uncovered two skeletons, one a baby, the other an adult. Given the midden piled atop them, the corpses have been lying in this well for approximately four hundred years. At the same time, the archaeologists and the neighbors living near the dig are experiencing uncanny echoes of what has been found. Murder? Shapeshifters? Witchcraft? Madness? Or a narrative of parallel yet wholly explicable events?

It is not unusual for a twenty-first-century mystery to move back and forth between past and present, to present a plot where the present reverberates with the past. Alexander has written an exceptionally adroit variation on the theme, using the past to illuminate the present. And vice versa.

The chapters of A Baby’s Bones alternate between 1580 and today. Vincent Garland, steward to Lord Banstock, kept an account ledger, listing his lordship’s expenditures and detailing the happenings of the manor in 1580. The reader follows his thoughts and his accountings. At the same time, the archaeologists—a professor and two students—are attempting to piece together the past from the remnants they have unearthed. They are not privy to Garland’s narrative, but they do have access to other manuscripts written by his contemporaries. They also turn to scientific expertise—chemistry, computer reconstructions, professorial research—to determine the truth of what happened more than four hundred years earlier. What makes the plotting so entertaining is the fact that the reader knows more than the archaeologists but shares the scientists’ progress as they finally uncover and establish the truth. I thoroughly enjoyed the logic they pursued, the extrapolations they made, the conclusions reached, and precisely how they got there.

Simultaneously, the diggers’ own lives are being uncovered. Sage Westfield is the lead archaeologist. Pregnant, she constantly compares her current situation with the skeletal baby she and her students have found. The father of her child remains married to someone else, and Sage,  planning to raise her baby without him, turns to the village vicar for support. Her chapters trace what is going on in her life in tandem with what is going on at the dig, offering personal as well as relevant scientific information.

Since there are mysteries to be solved, I don’t want to reveal too much of A Baby’s Bones’ plot. Suffice to say that a contemporary corpse is found in the excavated well in circumstances rather like the revealed past. And suffice to say that certain other contemporary events reinforce, even replicate, what has occurred before.  And while the reader learns a great deal about 1580, the reader understands almost nothing about the present day, other than the fact that most of the neighbors believe the cottage near the well is haunted and that ghostly sounds have been heard for centuries. That mystery unfolds with great interest and even greater surprises. A Baby’s Bones is more intellectually complex than most novels where the present re-echoes the past, and Alexander has written a fascinating duality of plots. Her characters are winning, too, so the book is a page-turner that doesn’t reveal all the answers until the very end. Murder? Shapeshifters? Witchcraft? Madness? Or a narrative of parallel yet wholly explicable events?  –  Ann Ronald

Ann Ronald is a retired English professor from the University of Nevada, Reno. Author of dozens of reviews, she’s also written a number of books about the American West. They include literary studies such as The New West of Edward Abby and Reader of the Purple Sage, cultural studies such as GhostWest and Oh, Give Me a Home, and nature writing such as Earthtones: A Nevada Album. Her latest is a work of fiction, Friendly Fallout 1953. Since retiring, she’s been reading vociferously, so “Bookin’ With Sunny” is giving her a wonderful opportunity to share thoughts about her favorite new discoveries.
More from this reviewer
PrevThe Wednesday Sisters
PaxNext