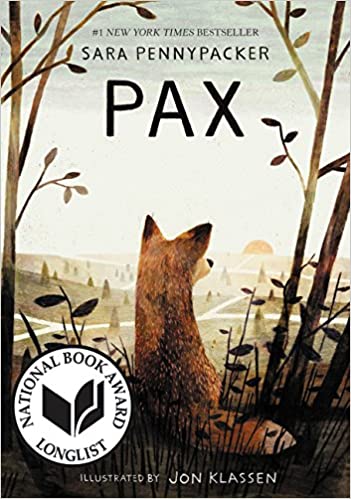 What? Another kids’ book? Well, yes, and no. Two things compel me to pick Sara Pennypacker’s Pax for my next review. First of all, it is one of those crossover novels that, because of the story and the writing, will be treasured by both young readers and adults. Secondly, because of the stress on both sides of the political aisle at this election time, I decided we readers need something special, something to calm us in these troubled days. Pax, the story of a young boy and his pet fox, rescued as a kit, is that special book.

Sara Pennypacker has accomplished the feat of giving voice to an animal without words coming from that animal. Pax is not a fable. Pennypacker’s writing is superb. And Jon Klassen‘s illustrations give depth to everything written. The story opens: “The fox felt the car slow before the boy did, as he felt everything first.” The boy is Peter; the fox is Pax. The car is driven by Peter’s father and headed for the woods. Pax, “Through the pads of his paws, along his spine, in the sensitive whiskers at his wrists,” begins to sense danger. Peter already knows what is coming. His father is going off to war, Peter must now go to live with his aged grandfather, and Pax must be returned to the wild. 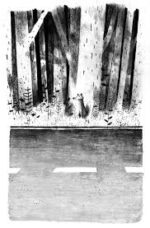 War, betrayal, and fear of the unknown for both Pax and “his boy” make up the heart of this story. A brutal conflict over water occurs near Peter’s home, near the river and woods where Pax is left by the roadside, and three hundred miles from where Peter is left with his grandfather. Peter only wants to find his way back to the side of the road, where he threw a toy for Pax to chase before they drove off. Pax only wants to get back to the side of that road and wait for his boy to return.

Pax, as a parentless kit only sixteen days old, was found among his dead mother and siblings and was brought home by Peter. Six years later, when left by the side of the road, Pax knew nothing of surviving in the wild. Peter, whose mother died not long after rescuing Pax and when left with an aloof grandfather, knew nothing more than what his anxiety told him: “Something bad is going to happen because you aren’t where you are supposed to be.” The fox and his boy had never been separated, and Peter knew where he should be.

Peter’s solitary trek to find Pax, and Pax’s search for his boy, lead them both on a journey through an unexpected wildness not only in the woods but also in themselves. What they learn from other animals (for Pax) and people (for Peter) will bring them through the terror of war, the wounding of limbs, and the healing of hearts. It will heal your hearts as well, and I suspect you will want to read its sequel due in 2021.  –  Sunny Solomon 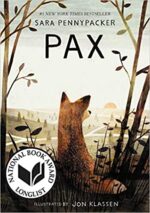 Sunny Solomon holds an MA in English/Creative Writing, San Francisco State University. She is a book reviewer for “The Clayton Pioneer” and her poetry and other writing has been published in literary journals, one chapbook, In the Company of Hope and the collection, Six Poets Sixty-six Poems. She was the happy manager of Bonanza Books, Clayton, CA and Clayton Books, Clayton, CA. She continues to moderate a thriving book club that survived the closure of the store from which it began. Sunny currently lives next to the Truckee in Reno, NV.
More from this reviewer
PrevA Baby’s Bones
Beautiful BadNext