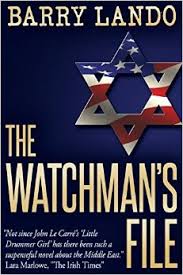 Normally we don’t talk about e-books on “Bookin’ with Sunny,” but Barry Lando’s The Watchman’s File is well-worth reviewing. For twenty-five years Lando worked as a producer for Sixty Minutes, specializing in investigative reporting on the Middle East. Author of a highly regarded international and political study, Web of Deceit: The History of Western Complicity in Iraq, from Churchill to Kennedy to George W. Bush, Lando now has turned his journalistic talents to fiction. The result is The Watchman’s File, a thought-provoking thriller (if that’s not an oxymoron). Last week I was reading a blog written by Lando, which I enjoyed; at the end of the piece was an ad for The Watchman’s File. Two clicks, and the e-book was mine.

What a provocative and timely story! It spans seventy-five years, from Nazi Germany to present-day Israel. The historical framework recounts the way American industrial giants, especially the big automobile companies, colluded with Hitler. Ostensibly, Hitler and his minions took over the German factories owned by American entrepreneurs. Many American businessmen, however, were sympathetic with the Fascist regime, and hints of collusion between American industrialists and the Nazis are well documented. Such appears to be the case in The Watchman’s File; the file itself spells out the connecting details.

Now Ed Diamond, a key reporter for a contemporary television show, gets wind of those early economic conspiracies. (Lando explains on his web page how a Sixty Minutes investigation intrigued him, and led to the plot of his novel.) Even more important than those past seditions, however, are Lando’s present-day fictional machinations. What might happen if militant Israeli politicians were to foster genuine anarchy? What if they were to manipulate public opinion through acts of terror, perpetrated by Israelis but made to look as if the terror were designed by Palestinians? And what if their end game was to influence a presidential election in the United States of America? What if their aim was to gain control, not only of our industries but also of our airwaves, and finally of our souls?

Yes, The Watchman’s File includes all the ingredients of a page-turning thriller. Torture, mayhem, hair-raising escapes. Despite the violence, however, the book is intellectually provocative. Not only does it raise practical and philosophical issues about economic collaboration with an enemy, but it also suggests how patriotic extremism might lead to outright evil. What drastic steps, indeed, might be taken by fervent citizens and warmongering soldiers to protect their homeland? To manipulate the news cycle? To stymie peace negotiations? To remake politics in unsavory ways?

For those of us who enjoy thinking about such conundrums, and for those of us who enjoy a rollicking spy adventure of international intrigue, The Watchman’s File is a book not to be missed. Ed Diamond is an admirable hero, first caught up in events he doesn’t understand and then committed to going public with all that he learns. Ed’s supporting cast is equally down-to earth. The Watchman’s File villains may be exaggerated in the service of truth, and some of the confrontational scenes may be hard to believe, but the underlying thematic narrative is convincingly real. Lando’s imagination leads his reader straight to the daily news, tweaked just a little, in the service of underlying truths.   – Ann Ronald

Although this book was reviewed in its eBook format, it is also available in paper at your favorite independent bookstore. – Bookin’ with Sunny 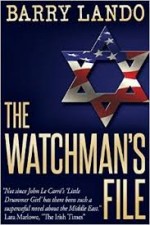 Ann Ronald is a retired English professor from the University of Nevada, Reno. Author of dozens of reviews, she’s also written a number of books about the American West. They include literary studies such as The New West of Edward Abby and Reader of the Purple Sage, cultural studies such as GhostWest and Oh, Give Me a Home, and nature writing such as Earthtones: A Nevada Album. Her latest is a work of fiction, Friendly Fallout 1953. Since retiring, she’s been reading vociferously, so “Bookin’ With Sunny” is giving her a wonderful opportunity to share thoughts about her favorite new discoveries.
More from this reviewer
PrevMaisie Dobbs – No. Three and Four
Wilderness and the American MindNext