Maisie Dobbs – No. Three and Four

These are installments three and four in Winspear’s Maisie Dobbs detective series. The Great War continues to cast cool and disconcerting shadows onto survivors’ lives as Maisie is finishing her second year as a rising P.I.—psychologist and investigator.  In Pardonable Lies, Maisie and her Cockney sidekick, Billy Beale, are challenged in September 1930 to solve three mysteries simultaneously.  One is a straightforward murder except that the accused is a thirteen-year-old girl prostitute.  The second is unusual because a prominent attorney, Sir Cecil Lawton, KC, has been charged by his dying wife to prove that their son Ralph wasn’t actually killed while flying in France in the Great War.  Sir Cecil, however, dumps a large amount of money on Maisie for her to prove that Ralph has really died.  The third results from a plea to Maisie by Patricia Partridge, her best friend, to discover (pro bono) the circumstances under which her brother Peter, presumably killed, disappeared without a trace in the Great War.

To solve these mysteries Maisie will accomplish some sophisticated sleuthing while searching for emotional reserves she’s not sure he has.  Along the way she returns to France where she was a trauma nurse in the war and where her first love was grievously and permanently injured.  As the mysteries surge and intertwine she will also be forced to doubt the loyalty of her mentor, Maurice Blanche, and doubt, too, her trust in him.  It becomes apparent that he has lied to her.  Are they pardonable lies?  Are there other such lies that have been or must be told?

Messenger of Truth begins in early 1931 as the full effects of the Great Depression are settling in.  Good, hard working people like Billy Beale are beginning to struggle and to doubt the benignity of an uncertain future.  Maisie comes to the realization that her professional life is dependent on those who can afford her expensive services.  Justice or worthiness having little to do with her clients,  Masie has ambivalent feelings about this realization.  Georgina  Bassington-Hope is just such a client.  Although she has made her way materially in the world as a free-lance journalist, she comes from an artsy Bohemian family that has never had to look beyond its trust funds and ancestral lands for means of support.  Georgiana hires Maisie to investigate her brother’s death.  A prominent London artist, Nicholas Bassington-Hope has fallen to his death from a scaffold while preparing to install controversial paintings depicting horrific scenes from the Great War.   Taking the case, Maisie becomes enthralled by Georgina’s hugely entertaining family but is afraid that they may be coopting her into their life-style detached as it is from the realities of most English people ‘s straightened circumstances.

In these two novels, Maisie continues her personal and professional maturation.  By my reckoning she is about thirty-two or three.  She has begun to re-establish a closer connection with her father, a former costermonger turned horse trainer.  Her education at Oxford, interrupted by nursing service in France, was finished some years ago but, frankly, it isn’t as important as the education she received from her tutor Maurice Blanche and from her trauma(tic) nurse experiences. The emotional strains of war-ravaged France are still manifested in her nightmares and occasionally in day mares, too.  Her love life is uncertain.  (Spoiler alert: if you haven’t read the first two Masie Dobbs novels, you might wish to skip the next several sentences.)  Not completely recovered from the trauma of her first love, she is entirely resistant to the pursuit of DI Richard Stratton although they have established a working professional relationship.   Her semi-romantic relationship with Dr. Andrew Dene runs hot and cold.  Finally, I have to say something about Winspear’s obsession with fashion.  I find it distracting although one might counter by claiming that Maisie’s fashion fixation is part of her ambivalence towards the class and wealth realities of 1930’s England. Still, these are entertaining and thoughtful novels.

Also available by Jacqueline Winspear: Maisie Dobbs; Birds of a Feather; Pardonable Lies; A Lesson in Secrets; The Mapping of Love and Death; An Incomplete Revenge; Elegy for Eddie; Among the Mad; The Care and Management of Lies. 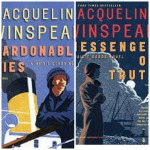 Neal Ferguson is a self described Anglo-phile. After studying for a PhD in British history and doing research for a year in various British archives, he came to the University of Nevada in 1970 to teach. Soon he found himself in administration where he remained until 2003. After returning to full-time teaching a decade ago, he decided to concentrate his teaching energies on Medieval British history and various global aspects of World War II. Dedicated to Ambrose Bierce’s proclamation that the purpose of war is to teach Americans geography, Neal insists that his students accompany him (in class) to sundry east European rivers and steppes, African deserts and jungles, south-east Asian mountain ranges and peninsulas, and small islands and coral reefs in the Pacific. Currently he is writing a book about the ups and downs of General Douglas MacArthur’s military reputation.
More from this reviewer
PrevThe Girl in the Blue Beret
The Watchman’s FileNext