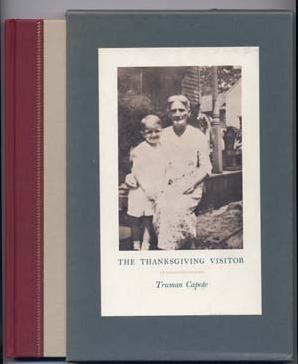 My annual reading of Truman Capote’s beloved story, The Thanksgiving Visitor, a tale of the spirit of giving, is my bellwether that Macy’s Thanksgiving Day Parade cannot be far away.

Capote’s autobiographical story takes the reader back to his Alabama roots and the family of distant cousins who raised him. Miss Sook, a spinster cousin who calls him Buddy, is his best friend. The year is 1932. The story is in homage to this innocent and wise lady, who, like Buddy, lives off the largess of the same cousins in their large home. Thanksgiving Day, and especially dinner, is a much-anticipated event. This is the day when distant families pack up their children, their homemade dinner treats, leave the isolation of their rural lives and come to the big house for a day of reunion and feasting.

Capote’s writing is direct and unaffected. We see the characters through the eyes of Buddy, a precocious yet sympathetic boy. At the time of the story, Buddy is in the second grade and is constantly beset by the class bully. The bully, a boy who had to repeat the second grade more than once, is twelve years old. Miss Sook, as Buddy’s friend and confidante, knows of the bully’s troubled family life. She takes matters into her own hands and invites the bully to their Thanksgiving dinner. Therein lies the tale. It is a story of bravery, cowardice, forgiveness, redemption, and thanksgiving, as powerful today as when first published in McCall’s, in 1967.

Capote wrote an earlier story, A Christmas Memory, based on the same family. What I want to write about this month is not just Capote’s stories, but all the holiday books to be read and reread throughout the season. It is never too late to start collecting Christmas books (and yes, there are more than a few Chanukah books, as well). The holiday books from our childhoods, our parents’ childhoods, our grandparents’ childhoods, and so on down the line are out there waiting to be read and reread. Of all the various types of books one can collect, holiday books can be the most fun. These are books you can accumulate for your families and then pass them along to your grandchildren. They are memories ripe for the making.

When I was a kid, Christmas stories began at the reading of Dickens’  A Christmas Carol. That beginning intensified when my parents bought the record album of Lionel Barrymore’s very scary reading of the tale. I play the old 78’s on an even older record player for my own children, and it’s still scary but scratchier than when first heard. I have several book editions of the story now, but my favorite is the one published in 1938, with an introduction by Barrymore.

Which stories do you remember? Miracle on 34th Street? Maybe O. Henry’s The Gift of the Magi, Toni Flynn’s Return of the Magi, or Henry Van Dyke’s The Story of The Other Wise Man? Who doesn’t have a copy of How the Grinch Stole Christmas? Did you know that The Littlest Angel has been in print for 51 years? Does anyone know if Loretta Young’s recording of that story is out on CD? Out in both print and CD is Dylan Thomas’ A Child’s Christmas in Wales. Another famous Welshman, Richard Burton, wrote A Christmas Story. Going way, way back are Washington Irving’s Old Christmas and Robert Browning’s story, Christmas Eve. The Night Before Christmas has been in print continuously since 1893. Poets T. S. Eliot wrote The Cultivation of Christmas Trees and e. e. cummings, Little Tree, while Joseph Henry Jackson wrote The Christmas Flower, a story about the poinsettia. Robert Sabuda’s Christmas stories give new meaning to the art of the pop-up book. Often it is the illustrator who adds depth to the tale -such is the case with Margaret Wise Brown’s The Little Fir Tree and Robert Kenerk’s Bear’s First Christmas, both beautifully illustrated by Santa Cruz artist Jim LaMarche. Martin Waddell’s story of the very first Christmas, Room for a Little One, A Christmas Tale, is brought to life by the rich illustrations of Jason Cockcroft. My newest favorite is Kate DiCamillo’s Great Joy.

One can never have enough holiday books. They are easier to store than ornaments or other decorations. They always complement any décor, from the living room coffee table to the kids’ rooms, the family room, and, oh yes, let’s not forget the holiday cookbooks, to the kitchen.

Turn off the TV and the cell phone, put the PC on hibernate, curl up with your favorite person(s), open the book, and turn to page one…..”It was the hour of rest in the Country Beyond the Stars….”

As an addendum to this 2007 column that first appeared in the Clayton Pioneer, may I wish you all the happiest of holidays, beginning with Thanksgiving, 2019.  – Sunny Solomon 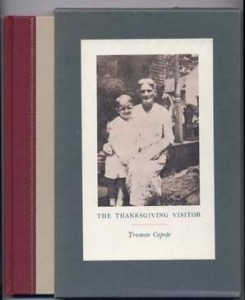 Sunny Solomon holds an MA in English/Creative Writing, San Francisco State University. She is a book reviewer for “The Clayton Pioneer” and her poetry and other writing has been published in literary journals, one chapbook, In the Company of Hope and the collection, Six Poets Sixty-six Poems. She was the happy manager of Bonanza Books, Clayton, CA and Clayton Books, Clayton, CA. She continues to moderate a thriving book club that survived the closure of the store from which it began. Sunny currently lives next to the Truckee in Reno, NV.
More from this reviewer
PrevThe After Party
A Woman of Two MindsNext