Home » Reviews » The After Party 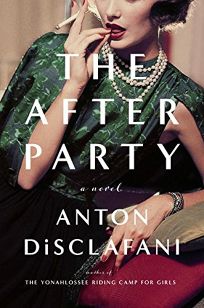 Anton DiSclafani writes intriguingly insightful novels about young women who have more money than good sense.  I reviewed her first such narrative, The Yonahlossee Riding Camp for Girls, for “Bookin’ with Sunny” on September 6, 2013.  Now DiSclafani has written a second, The After Party, set in Houston, Texas, with many of the same strengths (and occasional miscues) as Yonahlossee.

One major strength is structural.  Like its predecessor, The After Party‘s narrator is an older woman looking back at passing events of her childhood and pondering life-changing episodes that altered her irrevocably.  Cece moves seamlessly back and forth, recalling her schoolgirl days chronologically while also focusing on two momentous occasions.  One occurred just as she was graduating from high school, while the other happened in 1957 when she was a young wife and mother but behaving like a frivolous Houston socialite. Handling shifting points of view through a single narrative voice is tricky, and DiSclafani is a master.

Cece’s focus, no matter what the time frame, always hones in on her best friend, Joan.  The mysterious Joan exudes star power.  Fascinated by Joan’s magnetism, Cece behaves like a schoolgirl with an adolescent crush, even after the two reach adulthood and much to the distaste of Cece’s husband, Ray.  Rather like a joyful puppy, Cece obsesses about her friend, not in a sexual way but an all-consuming, idealizing (and immature) manner.  Frankly, I got tired of Cece’s fixation.  But just when I was most annoyed, DeSclafani turned the tables on my expectations, revealing secrets and rebalancing the bonds between the two women.  And even though the final sections of The After Party are surprising, the actions and the after stories are perfectly in tune with the characterizations that DeSclafani has created.

Those characterizations are a strength, too.  I wanted to shake some sense into Cece on nearly every page, yet I found myself in sympathy with her weaknesses.  DiSclafani presents a three-dimensional human being whose foibles are an integral part of her personality, who recognizes her own irrationality where Joan is concerned, and who falls helplessly in thrall to her idealized best friend.  A larger cast of young Houston debutantes provides the cohesive background for The After Party.  These women are equally well-conceived and smartly presented.  Their expensive clothes, their caviar tastes, and their personalities (alternatively catty and bovine) bring them each to a particularized life.

Houston nightlife provides a backdrop as well.  Lurching from one nightclub to the next, from one cocktail to the next, The After Party cast staggers and stumbles from one Houston landmark to another. Apparently, the nightclubs that attract them were well-known hot spots in the 1950s, and DeSclafani has researched not only the details of the décor, like the Shamrock Hotel’s multiple shades of green, but also the whims and whiskey preferences of the out-sized personalities who populated their bar stools and tables.  Such local color is fun to read. The eccentricities of Houston high society are fun to read about, too.  Cece and Joan are generational figures, big hair Texas women corralled by big belt buckle Texas men.   DiSclafani, for her recreation of their mid-century misadventures, is to be commended.   –   Ann Ronald 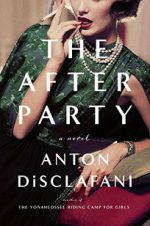 Ann Ronald is a retired English professor from the University of Nevada, Reno. Author of dozens of reviews, she’s also written a number of books about the American West. They include literary studies such as The New West of Edward Abby and Reader of the Purple Sage, cultural studies such as GhostWest and Oh, Give Me a Home, and nature writing such as Earthtones: A Nevada Album. Her latest is a work of fiction, Friendly Fallout 1953. Since retiring, she’s been reading vociferously, so “Bookin’ With Sunny” is giving her a wonderful opportunity to share thoughts about her favorite new discoveries.
More from this reviewer
PrevHow to Catch a Mole
The Thanksgiving VisitorNext