A Woman of Two Minds 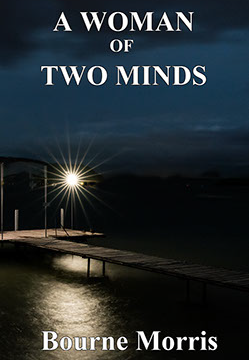 A WOMAN OF TWO MINDS

Somehow, I never imagined the author of the three-book Red Queen mystery series would next turn her attention to science fiction. I also never imagined how much I, someone who rarely chooses science fiction to read, would enjoy Bourne Morris’s new novel, A Woman of Two Minds. In its pages, she extrapolates current research on mice embryos at the University of Nevada, Reno, and applies the principles of those embryonic investigations to the human brain. The result is fiction with a scientific twist, overlaying a murder trial, and a twisted series of innovative encounters.

The basic premise of A Woman of Two Minds is simple. Two women have been badly hurt. Margaret Carlson, a fifty-year-old business tycoon, has been burned beyond recognition in an automobile accident, though her mind is intact. Katherine (Kit) Mackenzie, a gorgeous twenty-three-year-old, has tried to commit suicide with a bullet to the head. Her body is intact, but her brain has been severely impacted. What might happen if Margaret’s memory and intellect replace Kit’s? The answer, of course, is a woman “of two minds.”

The novel begins with a shooting. An intruder breaks into Kit’s Reno home, tries to shoot Kit, and Kit shoots back, with better aim. When the intruder turns out to be Kit’s estranged mother, the Reno district attorney arrests Kit and brings her to trial for first-degree murder. He has learned of the illegal surgery several years earlier, and he believes Kit’s/Margaret’s damaged brain is guilty of premeditation. A Woman of Two Minds closely follows the trial, as the local DA reconstructs Kit’s relationship past and present with her mother as well as the medical invasion she/Margaret suffered. Meanwhile, the defense attorney scrambles to discern the truth surrounding the miracle operation, in tandem with what might have happened the night of the murder.

Intriguing? Absolutely. In truth, A Woman of Two Minds doesn’t read like science fiction at all. If one accepts the basic premise that Margaret’s brain has been successfully transplanted to Kit’s body, what follows is an engrossing mystery. The medical explanations are presented in plausible terms, the action moves believably between hospital and home, from New England to Southern California to Reno. The trial itself crackles with surprising new evidentiary finds and tense witness examinations and cross-examinations.

Bourne Morris writes well, so the descriptions and the characterizations are articulate and smart. Her plotting is unique, so much so that before long the reader forgets the science fiction premise and just gets engrossed by the behavior of this woman “of two minds.” Who is in control of Kit/Margaret’s intellect and actions? That’s for the reader to decide, although the author gives strong hints in the novel’s final pages, pages that are fun to read and ripe with speculations.

I’ve written before, in “Bookin’ with Sunny” reviews of the Red Queen series, that Bourne Morris is a long-time friend. I must ask her, whatever possessed her mind to create such an original story-line, to take university research in such a humanly plausible direction? And I must tell her I’m glad she did so because A Woman of Two Minds is a very finely-wrought mystery indeed.   –  Ann Ronald 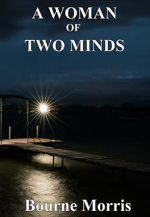 Ann Ronald is a retired English professor from the University of Nevada, Reno. Author of dozens of reviews, she’s also written a number of books about the American West. They include literary studies such as The New West of Edward Abby and Reader of the Purple Sage, cultural studies such as GhostWest and Oh, Give Me a Home, and nature writing such as Earthtones: A Nevada Album. Her latest is a work of fiction, Friendly Fallout 1953. Since retiring, she’s been reading vociferously, so “Bookin’ With Sunny” is giving her a wonderful opportunity to share thoughts about her favorite new discoveries.
More from this reviewer
PrevThe Thanksgiving Visitor
Wild at HeartNext