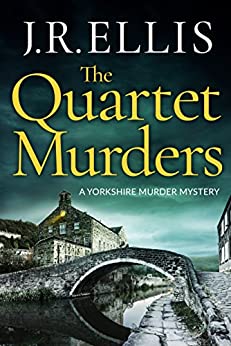 The Quartet Murders — J. R. Ellis has composed a murder mystery second only to Schubert’s second movement in his Quartet in D Minor. Can murder be music to our ears?

Anyone who loves the music of string quartets will be engrossed by J. R. Ellis’s police procedural, The Quartet Murders. The first murder takes place at an arts centre in Yorkshire, just as the four featured musicians pause after the second movement of Schubert’s Quartet in D Minor, Death and the Maiden. As Ellis describes the music, “A turbulent passage of agony climaxes in death throes but then subsides slowly into quietness and calm.” In the ensuing moment of silence, a single shot to the forehead kills the first violinist on the spot.

Detective Chief Inspector Jim Oldroyd, who enjoys classical music and especially adores string quartets, is sitting in the audience when the murder onstage occurs. He immediately secures the scene and waits for additional policemen to arrive. The Red Chapel Arts Centre, located in Halifax, lies outside Oldroyd’s jurisdiction, but when an old friend arrives to take charge, Oldroyd is swept into the mystery of the moment. Apparently, the victim was shot from the lighting gantry above the audience; the killer is nowhere to be found.

Furthermore, when the police begin examining the stage and the corpse, they discover that the victim’s precious violin, a Stradivarius, has gone missing. In the uproar that followed the murder, no one in the audience noticed anything amiss. One member of the Music Society committee had briefly gone outside after the shot was fired to see if anyone was running away, but otherwise, no one saw anyone leave or return to the building. No one noticed any movement onstage, either. The remaining three members of the quartet had taken their instruments and sheltered in a downstairs room, while DCI Oldroyd kept watch over the body and kept the audience at bay. How did such a valuable violin just disappear?

Almost a locked room mystery, except this murder and subsequent theft occurred in an ancient chapel filled with astonished onlookers. DCI Oldroyd, plus his right hand Harrogate Detective Sergeant Andy Carter, join the Halifax police as they work together to solve the dual conundrums. What follows is a fascinating probe into musical intrigues. A significant portion of the plot revolves around the acquisition of valuable instruments, like Stradivarius violins. Some acquisitors are shady, others more forthright. The provenance of the victim’s violin adds to the plot, too. Perhaps it once belonged to a wealthy Jewish family in East Germany, but no one knows how it came into the possession of the first violinist of the highly-regarded Schubert Quartet.

The steps Oldroyd and Carter take to solve the mysteries resemble any number of other police procedurals. However, each step involves music, too. Most of the characters are listening to music when the police call upon them for interviews, music that echoes the tension of that particular moment. And each chapter is headed by a paragraph describing the provenance of another famous Stradivarius. There is a lot of knowledge included in The Quartet Murders. I wanted to listen to the relevant music while I was reading, and I checked the internet to see whether the histories of the other Stradivarius were true (they are).

The Quarter Murders is apparently the second of six Yorkshire murder mysteries written by J. R. Ellis, with a seventh scheduled for publication in December 2021. They all feature DCI Oldroyd and DS Carter. As seems obvious by the series title, they all involve Yorkshire local color and lore. They’re on my list to read soon because I particularly like smart mysteries where I learn something while I read. The Quarter Murders suited me perfectly.  –  Ann Ronald 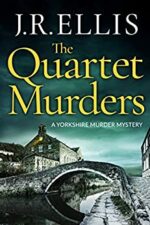 Ann Ronald is a retired English professor from the University of Nevada, Reno. Author of dozens of reviews, she’s also written a number of books about the American West. They include literary studies such as The New West of Edward Abby and Reader of the Purple Sage, cultural studies such as GhostWest and Oh, Give Me a Home, and nature writing such as Earthtones: A Nevada Album. Her latest is a work of fiction, Friendly Fallout 1953. Since retiring, she’s been reading vociferously, so “Bookin’ With Sunny” is giving her a wonderful opportunity to share thoughts about her favorite new discoveries.
More from this reviewer
PrevBeheld
Everyone Brave Is ForgivenNext