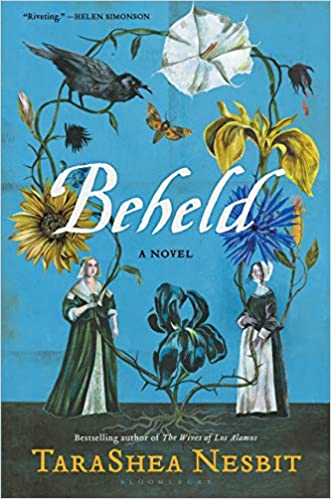 Beheld – a novel of the first settlers of the Plymouth Colony and the complex domestic constraints under which the women lived.

When I reviewed TaraShea Nesbit’s first novel, The Wives of Los Alamos, for “Bookin’ with Sunny,” I remarked on the circumscribed milieu. Captives of circumstances, with enigmatic husbands and difficult domesticity, with inexplicable rules and secrets, the wives struggled to carve livable lives for themselves on an isolated mesa in the unfamiliar West. Although its time frame takes place more than three hundred years earlier, the same sort of constraints dictate the boundaries of Beheld, too.

The women of Beheld have been brought by their husbands to Plymouth Colony. They’ve suffered a horrendous voyage across the Atlantic. Many of their children died en route. Now they’re trying to civilize an unfamiliar wilderness. And yes, they have enigmatic husbands and difficult domesticity, and they too must follow inexplicable rules and secrets. Puritanism dictates their behavior, codifies their morality, narrows their outlooks. And they must never question the strictures placed on their hearts and minds.

Much of Beheld is true, discernable through archival research. Almost everything we know about the Plymouth settlement was written by the landed men, however, so Nesbit has gone beyond the available documents and imagined the lives of the women who accompanied the men—what they were thinking about the brutality of the New World confronting them and what they were saying (or not saying) to their husbands and to each other. Even when Nesbit extrapolates, and she must do so whenever and wherever the historical record is silent, her surmises seemed wise to me.

One of her most complicated characters is Alice Bradford, the wife of William Bradford, the first governor of Plymouth who wrote Of Plymouth Plantation. A deeply religious man, his writings have cemented the way we are taught Puritan history in school. Nesbit, however, tiptoes behind his façade and views him and his actions through Alice’s eyes. She is his second wife. Without ever setting foot on land, his first wife died as the Mayflower reached the rocky New England shores. William then summoned the recently-widowed Alice, who was his first wife’s best friend, to sail alone and be his second bride.

Beheld takes place in 1630 after Alice has been settled in Plymouth for seven years. Through flashbacks, we learn of her friendship with Dorothy Bradford, of her marriage to Edward Southworth and his subsequent death, of her travels to the colony from her separatist exile in Holland, and of her memories of her first Plymouth experiences. At the end of the novel we also flash forward, when an elderly Alice reminisces about those early days and dreams about the past.

Alice is not the only important female character in Beheld, though I can’t describe Eleanor Billington without revealing too much plot. She and her outspoken, indentured husband John expected to land in Virginia, not in Plymouth, and have never been satisfied with their New World treatment. Billington’s clashes with the powers-that-be, and especially with the mythic Myles Standish who behaves very differently than Henry Wadsworth Longfellow would have us believe, thrust Beheld’s plot forward. Those clashes actually happened; the beauty of Beheld is Nesbit’s notion of how the women probably reacted, how they behaved, what they said and didn’t say.

I can say that Beheld is one of the best novels I’ve read in 2021. Not only is it faithful historical fiction, with a feminine twist, but it’s timely, too. As I earlier remarked, Beheld is a cautionary tale of religious zealotry that today’s readers well might heed.  –  Ann Ronald

Also available by TaraShea Nesbit: The Wives of Los Alamos. 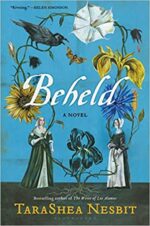 Ann Ronald is a retired English professor from the University of Nevada, Reno. Author of dozens of reviews, she’s also written a number of books about the American West. They include literary studies such as The New West of Edward Abby and Reader of the Purple Sage, cultural studies such as GhostWest and Oh, Give Me a Home, and nature writing such as Earthtones: A Nevada Album. Her latest is a work of fiction, Friendly Fallout 1953. Since retiring, she’s been reading vociferously, so “Bookin’ With Sunny” is giving her a wonderful opportunity to share thoughts about her favorite new discoveries.
More from this reviewer
PrevCircle Way
The Quartet MurdersNext