The Wives of Los Alamos 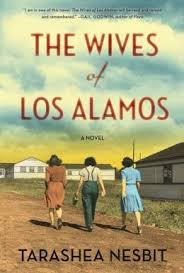 TaraShea Nesbit made a stunningly smart decision when she wrote The Wives of Los Alamos. She chose to tell their stories through a collective consciousness that embraces all of the wives together, to envelop the reader in that quagmire of isolation and intimacy where the women raised their children in a top-secret place while their husbands clandestinely worked at crafting an atomic bomb. Set between 1943 and 1945, The Wives of Los Alamos includes all the women who lived and worked there, but most especially captures the plights of those who were married to the physicists, those women who were swept away from their homes, sent to distant New Mexico, and then kept in the dark about their husbands’ war efforts.

By not following the experiences of any single wife, and by grouping sets of behavior patterns together, Nesbit draws us into that circumscribed Los Alamos community and makes us feel as if we too were caught in its intrigues. She begins with a car pulling into a mid-West or California driveway, a strange man suddenly appearing at a New York or London apartment. She navigates families across the country, drops them into mysterious Santa Fe, and then sends them off to what they describe as a mesa in the sky. Once there, the daily routines consume the wives. Once there, Nesbit touches on every facet of Los Alamos life.

I tried to find a single paragraph that might adequately convey this communal novel, but I couldn’t choose. There are so many diverse incidents and interactions that picking one or two only gives a sense of particularity, which is counter to the theme. It is the overall inclusiveness of the experiences that makes The Wives of Los Alamos so successful. Nesbit looks at the ways the women behaved with their husbands, the ways they treated the local help, the ways they distrusted the military presence and genuinely disliked the WACs who controlled the commissary purse strings, the ways they coped with substandard housing, the ways they were pummeled by the weather and the incessant blowing sand, the ways they occupied their time, the boredom, the ways they gossiped about each other, the ways their friendships evolved.

After the Alamogordo explosion in 1945, and after the bombing of Hiroshima and Nagasaki, the secrets of Los Alamos are revealed to the world and to the wives who lived there. Almost immediately, philosophical rifts began to tear at the fabric of the community. Some scientists and their wives defended their work as necessary to end the war, while others were horrified at what their research had accomplished. Some left Los Alamos for distant university positions, for industrial research, for experimentation at other laboratories such as Oak Ridge or Richland or Lawrence Livermore or Mercury. Some became anti-war protesters. Some talked about their accomplishments, others remained forever silent. As their attitudes and experiences diverged, Nesbit’s Los Alamos communal voice continues their stories in chords both harmonious and dissonant.

The stories themselves are as accurate as Nesbit can make them. The Wives of Los Alamos is a work of historical fiction at its highest level, with impeccable research that reveals exactly what the wives would have known, not known, and misunderstood. I personally have studied this moment in history, have spent time in the Los Alamos archives, have read much of what has been published about the daily lives of atomic researchers in the middle of the twentieth century. I thought Nesbit caught the details—both the big picture historical facts and the minutiae of remote Los Alamos, the seclusion and the sequestration—extraordinarily well. For writing The Wives of Los Alamos, Nesbit deserves my strongest accolades.   – Ann Ronald 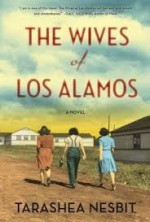 Ann Ronald is a retired English professor from the University of Nevada, Reno. Author of dozens of reviews, she’s also written a number of books about the American West. They include literary studies such as The New West of Edward Abby and Reader of the Purple Sage, cultural studies such as GhostWest and Oh, Give Me a Home, and nature writing such as Earthtones: A Nevada Album. Her latest is a work of fiction, Friendly Fallout 1953. Since retiring, she’s been reading vociferously, so “Bookin’ With Sunny” is giving her a wonderful opportunity to share thoughts about her favorite new discoveries.
More from this reviewer
PrevDeath Comes to Pemberley
EssentialismNext