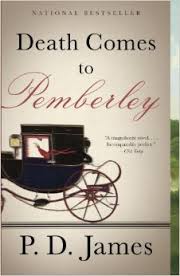 If my internet calculations are correct, nearly two hundred sequels to Jane Austen’s Pride and Prejudice have been written! Noted mystery novelist P. D. James is the latest to imitate Austen’s early nineteenth-century prose. Death Comes to Pemberley carries Austin’s fictional characters forward into another series of prideful, prejudicial confrontations, this time when a body is discovered on the Pemberley grounds. Elizabeth and Fitzwilliam Darcy, happily married for several years and the proud parents of two young boys, are preparing to host a glamorous fete. But the night before the gala, fate intervenes.

Lydia, Elizabeth’s younger sister now married to raconteur George Wickham, arrives hysterically on the Darcy’s doorstep. Her husband is missing in the Pemberley woodlands, along with his comrade-in-arms, Captain Denny. The distraught young woman heard shots, and fears for their lives. Slowly the plot ravels and unravels, as the Wickhams (who have never ever been invited to Pemberley and whose sudden appearance is startling and unsettling to everyone) behave in ways pitch-perfectly reminiscent of their antics in Pride and Prejudice. There is a corpse, there is a suspect, there is an investigation, there is an inquest, there is a trial, and finally here is a verdict. Throughout, the Darcys both separately and together attempt to make sense of a senseless set of occurrences.

An Author’s Note at the beginning of Death Comes to Pemberley quotes Jane Austen’s own abhorrence of murder and mayhem. “Let other pens dwell on guilt and misery,” Austen wrote in the final chapter of Mansfield Park. “I quit such odious subjects as soon as I can.” P.D. James, author of some twenty highly acclaimed mysteries, of course relishes investigating guilt and misery. So she apologizes “to the shade of Jane Austen for involving her beloved Elizabeth in the trauma of a murder investigation.” (Because I found an unfortunate number of Pride and Prejudice sequels involving zombies, I personally believe James has no need to apologize; she should leave that to the zombie writers!)

In laudable ways, James’s sequel successfully imitates Jane Austen’s cadences, if not her subject matter. As soon as I read the opening line of Death Comes to Pemberley, I knew James’s ear heard Austen perfectly and that her pen would nicely replicate her predecessor’s prose. In fact, this James’s novel sounds unlike any of James’s other creations. It moves slowly and circuitously, like a British novel written during Jane Austen’s time, not in the twenty-first century. The procedural matters sound quaint to a modern reader. When the body is moved and washed before the authorities are called, no one questions the decisions made by the lord of the manor and his servants. The autopsy, such as it is, seems primitive, while the role of counsel for the accused is surprisingly truncated. Never speeding up the pace or introducing awkward anachronisms, James always allows Austen’s characters to behave appropriately.

Anyone who appreciates Jane Austen’s novels will enjoy this one. I have read other sequels, applauding some and loathing others. Death Comes to Pemberley definitely is one worth investigating. Even the ending is a treat, when well-known characters from another popular Austen novel triumphantly make their mark on the denouement of James’s imaginative creation. I think Jane Austen’s shade might actually approve.   – Ann Ronald

Also available by P. D. James: The Children of Men; A Mind to Murder; An Unsuitable Job for a Woman; Cover Her Face; Shroud for a Nightingale; Unnatural Causes; Innocent Blood; The Skull Beneath the Skin; The Black Tower; The Murder Room; Death of an Expert Witness; Death in Holy Orders; A Taste for Death; A Certain Justice; The Lighthouse; The Private Patient; Devices and Desires; Original Sin; The Maul and the Pear Tree; Talking About Detective Fiction; Time to be in Earnest, A Fragment of Autobiography; In Murderous Company; The Acts of the Apostles; Taste for Death. 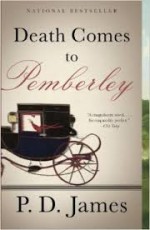 Ann Ronald is a retired English professor from the University of Nevada, Reno. Author of dozens of reviews, she’s also written a number of books about the American West. They include literary studies such as The New West of Edward Abby and Reader of the Purple Sage, cultural studies such as GhostWest and Oh, Give Me a Home, and nature writing such as Earthtones: A Nevada Album. Her latest is a work of fiction, Friendly Fallout 1953. Since retiring, she’s been reading vociferously, so “Bookin’ With Sunny” is giving her a wonderful opportunity to share thoughts about her favorite new discoveries.
More from this reviewer
PrevGreat Ghost Stories
The Wives of Los AlamosNext