Home » Reviews » Everyone Brave Is Forgiven 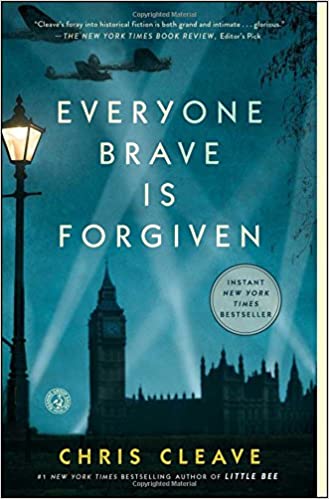 Everyone Brave is Forgiven – Chris Cleave’s novel in which the noble and ignoble characters, caught in the throes of WWII, find their way into bravery, the heroic, and even forgiveness.

Chris Cleave, in the course of his novel Everyone Brave Is Forgiven, explores notions of wartime bravery—military bravery, civilian bravery, heroics in the midst of crises, heroics in mundane day-to-day living. He does so with great subtlety, introducing his readers to a small cast of noble and ignoble characters caught in a maelstrom they never expected. With thoughtfulness and tact, he explores his protagonists’ countless moments of forgiveness, too.

Everyone Brave Is Forgiven opens with the first brave decision: “War was declared at eleven-fifteen and Mary North signed up at noon. She did it at lunch, before telegrams came, in case her mother said no.” Thus, Mary exits from finishing school in Switzerland and returns to London expecting an adventuresome future. What she finds instead is the slow dawning reality of an apparently endless World War II.

The novel follows Mary and her fellow brave souls from September 1939, until June 1942. Alistair, who volunteers almost as quickly as Mary, encounters the battlefields of France and finally endures the siege of Malta.  His brave forays include countless incursions, retreats, air raids, and enduring hostilities. His role is the most battle-worn in Everyone Brave Is Forgiven, with some of the most excruciating scenes I’ve read in wartime fiction. Meanwhile, his flatmate, Tom, secures what the Wartime Office considers an essential occupation, and spends half of the novel fretting about staying behind in London. Luftwaffe bombers, however, soon bring opportunities for bravery close to home.

Mary and her best friend, Hilda, find heroic opportunities as well. Expecting a glamorous or exotic role to play, Mary instead is assigned a mundane teaching job that ill-suits her talents. Or so she thinks. For her, Everyone Brave Is Forgiven serves as a coming-of-age narrative, one that moves a naïve young socialite from her parents’ pretentious shelter to bomb-shaken air raid shelters, war-torn streets, medical emergencies, and the cacophony of nighttime explosions and fires. Some of her brave encounters are as heart-rending as Alistair’s, soldier and civilian battling trauma, stress, love, and loss.

Yes, there is love in Everyone Brave Is Forgiven along with the ferocity. The book’s cover reveals that Cleve’s real-life inspiration was the war-time correspondence of his grandparents, although the Author’s Note at the end explains that the characters themselves are composites. Their personalities and their fictional stories are quite different than the personae and the experiences of his grandparents, though his grandfather did serve in Malta, and one grandmother was a teacher while the other drove an ambulance. Cleave interviewed a number of other war zone survivors, too. He makes a poignant observation, in fact, pointing out that his is the last generation of historians and novelists who will be able to talk with anyone who survived the London bombings. Cleave attributes the reality of his scenes to what he gleaned from those conversations.

Suffice to say that Everyone Brave Is Forgiven renders war as it must have been lived, with incidents of bravery both large and small. Because I don’t want to ruin the narrative in advance, I’ll not share any more details. More telling, I’ll not divulge any of the moments of forgiveness, or how Cleave weaves the two together. I can say, however, that his novel is a moving tapestry of courage, clemency, and compassion, one of the better war novels I’ve read in recent years. –  Ann Ronald 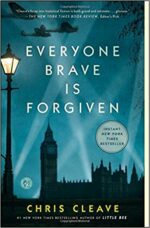 Ann Ronald is a retired English professor from the University of Nevada, Reno. Author of dozens of reviews, she’s also written a number of books about the American West. They include literary studies such as The New West of Edward Abby and Reader of the Purple Sage, cultural studies such as GhostWest and Oh, Give Me a Home, and nature writing such as Earthtones: A Nevada Album. Her latest is a work of fiction, Friendly Fallout 1953. Since retiring, she’s been reading vociferously, so “Bookin’ With Sunny” is giving her a wonderful opportunity to share thoughts about her favorite new discoveries.
More from this reviewer
PrevThe Quartet Murders
Flight of The SparrowNext