Home » Reviews » Flight of The Sparrow

Flight of The Sparrow 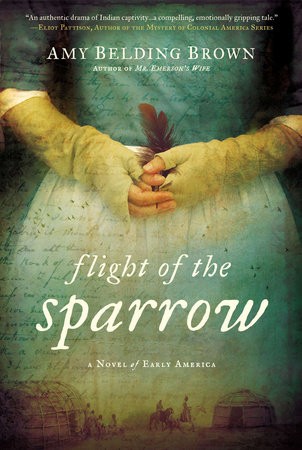 Flight of The Sparrow, Amy Belding Brown’s fresh and non-puritanical retelling of Mrs. Mary Rowlandson’s 1682 published narrative of her abduction by “savages.”

Mary Rowlandson, in 1682, published a narrative longwindedly titled The Sovereignty and Goodness of God, Together with the Faithfulness of His Promises Displayed, Being a Narrative of the Captivity and Restoration of Mrs. Mary Rowlandson. Scholars consider this account the prototype of the many such “captivity narratives” that followed, first-hand reminiscences of men and women (mostly women) abducted by “savages” in America, then later returned to “civilization.” That particular book, however, seems to have been a somewhat imaginative reconstruction of what really happened. Apparently, Mary Rowlandson gave a draft of her recollections to Increase Mather, who edited it extensively and added puritanical scriptures and life lessons. Like the many captivity narratives that would follow, this one sets a pattern that emphasizes faith in God in the face of unspeakable savagery.

Amy Belding Brown’s novel, Flight of the Sparrow, without benefit of puritanical oversight, reimagines Mary Rowlandson’s ordeal as the captive might actually have experienced it. In February 1675, a marauding band of natives attacked Lancaster in what is now western Massachusetts, burning houses and barns while killing some residents and kidnapping others. Mary and her three living children were among those marched out of town and then north. One of her daughters soon died en route, while her other two children, separated from their mother, were led elsewhere. Absent during the raid, her husband arrived home to find his property devastated, his family missing, and his life irrevocably changed.

Brown’s version of Mary’s captivity adheres to the historical timeline but is quite creative in its vision of Mary herself. Wife of a strict, patriarchal, puritan minister, Mary has a rather constricted view of man’s relationship to the natural world and of a woman’s place in a world of men. Her trek with her captors exposes her to entirely different attitudes. Expecting violence and cruelty, she instead finds unexpected kindness and even friendship. The trek itself is rigorous, with little food and recurrent storms, but Mary finds herself enjoying the natural world they travel through. Back in puritan Lancaster, she was never allowed to be outdoors alone. Journeying with the Indians, she discovers a freedom she had never known before.

She also finds herself in a matriarchal society, quite a contrast to the patriarchal life she has always led.   During the long days of arduous hiking through unforgiving terrain, Mary has plenty of time to think about the things she has been taught, and about how irrelevant those teachings now seem. Brown’s Mary comes to a new understanding of gendered relationships, and modes of parenting, too. She also has time to muse at length about slavery, for she is now a slave, the chattel property of the female chief who leads the tribe. Inside Mary’s mind, Brown manages to plant many timely and ultimately timeless, musings.

Mary’s ordeal was not a lengthy one. In early May, she was ransomed back to the English, and shortly thereafter, her remaining daughter and son were returned, too. She had plenty of days, however, to shed her puritanical narrowness, at least in Brown’s imaginative reconstruction of the “real” Mary Rowlandson. The remainder of Flight of the Sparrow takes place after Mary’s return to “civilization.” Those pages envision Mary’s psychological trials as she attempts to fit in with society’s expectations. No one, not even her husband, believes she remained chaste. He and her so-called friends press for details, which leads her to draft her “true” recollections. I’ve read the original; I personally prefer Brown’s more intuitive version.  – Ann Ronald 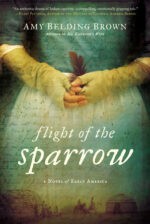 Ann Ronald is a retired English professor from the University of Nevada, Reno. Author of dozens of reviews, she’s also written a number of books about the American West. They include literary studies such as The New West of Edward Abby and Reader of the Purple Sage, cultural studies such as GhostWest and Oh, Give Me a Home, and nature writing such as Earthtones: A Nevada Album. Her latest is a work of fiction, Friendly Fallout 1953. Since retiring, she’s been reading vociferously, so “Bookin’ With Sunny” is giving her a wonderful opportunity to share thoughts about her favorite new discoveries.
More from this reviewer
PrevEveryone Brave Is Forgiven
I Saw A ManNext