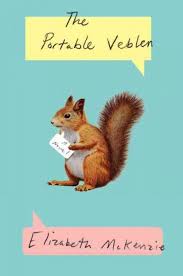 Madcap lunacy! The phrase that best describes Elizabeth McKenzie’s novel, The Portable Veblen, is “madcap lunacy.” McKenzie names her heroine after Norwegian economist Thorstein Veblen, who coined the phrase “conspicuous consumption” and who in 1899 wrote The Theory of the Leisure Class to critique the way people waste their money and their energies. The Portable Veblen riffs off the economist’s concepts, describing a collection of leisured men and women totally unable to function in socially acceptable ways. Instead of mature relationships, they conspicuously flounder together in “madcap lunacy.”

The catalyst that sets the plot in motion occurs in the opening pages of The Portable Veblen, when Dr. Paul Vreeland (an up-and-coming young Stanford researcher) proposes marriage to Veblen, an amateur Norwegian translator and a temporary typist with no college degree. He offers her a gigantically inappropriate diamond ring, along with his adoration. Veblen accepts. The remainder of the novel dances through the pre-marital negotiations—meeting friends and family, recognizing incompatibilities, discovering secrets, solving misunderstandings, ignoring reservations, learning to love.

Both Paul and Veblen come from what would commonly be called dysfunctional families. Paul’s parents are unregenerated hippies who live communally in northern California and tend to his disabled brother. Veblen’s father resides in a mental institution, while her mother, remarried to a milquetoast academic librarian, details her hypochondria to anyone who will listen. Paul and Veblen’s friends are no less peculiar, but none of them matches the lunacy of their immediate families. Overseeing the interactions, and providing its own nutty commentary, is a noisy squirrel who dwells in Veblen’s attic. He graces the cover of The Portable Veblen, and he plays an active role in its narration.

Besides talking constantly to her squirrel, Veblen clutches to her heart a very special book, Marriage: Dead or Alive, that articulates much of what she is fearing. A wedding is “no less than a boxing ring, two people facing off, acknowledging their separate identities rather than their union, in the company of all the people who lay claim to them.” She might be describing the entire plot of The Portable Veblen, as Veblen and Paul face off, fighting for their distinctly different personal needs in the midst of the all-consuming desires of their madcap relatives.

Dysfunctional characters and chaotic storylines often create tension in a reader, but this novel does just the opposite. The characters are so funny, their actions so outrageous and the outcomes so extreme, that this reader, at least, was chuckling at every page. When Paul invents a medical device that could make him rich and famous, McKenzie describes it as “the Swiss Army knife of brain surgery.” When Paul meets Veblen’s mother, she hands him a complete list of her medical history. “My,” he responds, “arranged almost like a CV!” Veblen’s conversations with the squirrel(s) are truly hilarious, as are her ministrations to her ailing parents and her contortions to try and fit Paul’s notion of a future wife.

Truly, the engaged couple and their caricatured relatives display all the kinks of Thorstein Veblen’s theory of the leisure class! Even the seven appendices that close The Portable Veblen hilariously summarize conspicuous consumption. In fitting fashion, they tie up stray ends of some very frayed plot lines and underscore the madcap lunacy of this very funny farce. – Ann Ronald 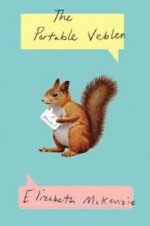 Ann Ronald is a retired English professor from the University of Nevada, Reno. Author of dozens of reviews, she’s also written a number of books about the American West. They include literary studies such as The New West of Edward Abby and Reader of the Purple Sage, cultural studies such as GhostWest and Oh, Give Me a Home, and nature writing such as Earthtones: A Nevada Album. Her latest is a work of fiction, Friendly Fallout 1953. Since retiring, she’s been reading vociferously, so “Bookin’ With Sunny” is giving her a wonderful opportunity to share thoughts about her favorite new discoveries.
More from this reviewer
PrevOld Glory, A Voyage Down the Mississippi
PacificNext