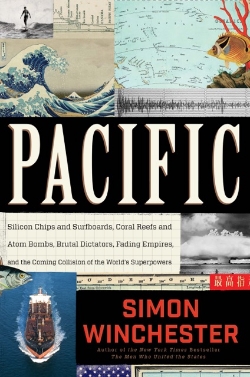 Simon Winchester, a skilled, graceful non-fiction writer, is no stranger to complicated subjects. Still, in Pacific he has set himself a daunting challenge: writing a mid-length, one-volume book exploring a body of water that makes up one-third of the earth’s surface, contains the “ring of fire,” presses against the deepest ocean floors, canyons, and mountain ranges, and laps up against four continents containing five of the world’s most powerful nations and billions of people. How does Winchester make sense of this bewildering complexity? Imperfectly and incompletely to be sure; nevertheless, he writes with verve and is seldom dull.

Winchester’s approach in Pacific is to select ten topics beginning with the Pacific’s experience of thermonuclear paroxysms circa 1950. Then, in chronological order he moves to other diverse and apparently arbitrary topics including Sony Corporation, surfing, the sinking of the Queen Elizabeth, super cyclone Tracy, and ends with the growing confrontation between China, the rest of Pacific Asia, and the U.S. The French and American wars in Viet Nam receive only brief attention. Since he is more interested in science than politics, the high-temperature vents in the Pacific floor command more space. Because those vents are connected to the creation of life on earth, his emphasis on them reflects his justifiable concern with what is more important in the grand scheme of things.

For each topic, Winchester is careful to provide context for and links to his overarching themes of which there are at least three. One is that the geopolitical center of gravity has shifted 180 degrees since 1945 from Greenwich, England to the International Date Line. A second is that the Pacific Ocean is the earth’s primary climate engine (think El Niño and La Niña). Finally, in the last seventy years, humanity’s impact on the Pacific, and by extension the whole earth, has been increasingly destructive. Global power politics and Promethean technologies have combined to produce widespread displacement of indigenous peoples, accelerate global climate change, intensify economic use, and to make international political and economic competition more stressful.

Pacific lacks the intense exploration of personalities found in my favorite of his books, The Professor and the Madman. Despite Pacific’s big pictures themes, it lacks a consistent intellectual or historical approach. consequently, the book doesn’t have the cohesion one may find in his other books, but it is an absorbing companion-piece to Atlantic that he wrote several years previously. – Neal Ferguson

Also available by Simon Winchester: The Professor and the Madman, Krakatoa, The Map that Changed the World; The Men Who United the States; The Man Who Loved China; A Crack in the Edge of the World; The Meaning of Everything; Skulls; Outposts; The Alice Behind Wonderland; Atlantic, Great Sea Battles; The River at the Center of the World; Bomb, Book & Compass; The Fracture Zone; When the Earth Shakes; Pacific Nightmare; The Man with the Electrified Brain; The Kindness of Strangers; By Rail and Sea. 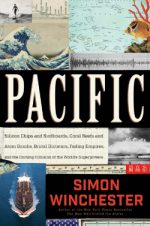 Neal Ferguson is a self described Anglo-phile. After studying for a PhD in British history and doing research for a year in various British archives, he came to the University of Nevada in 1970 to teach. Soon he found himself in administration where he remained until 2003. After returning to full-time teaching a decade ago, he decided to concentrate his teaching energies on Medieval British history and various global aspects of World War II. Dedicated to Ambrose Bierce’s proclamation that the purpose of war is to teach Americans geography, Neal insists that his students accompany him (in class) to sundry east European rivers and steppes, African deserts and jungles, south-east Asian mountain ranges and peninsulas, and small islands and coral reefs in the Pacific. Currently he is writing a book about the ups and downs of General Douglas MacArthur’s military reputation.
More from this reviewer
PrevThe Portable Veblen – One very squirrely engagement
Georgia, A Novel of Georgia O’KeeffeNext