Georgia, A Novel of Georgia O’Keeffe 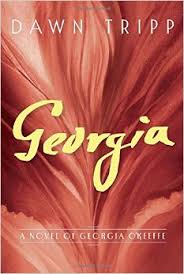 Georgia, a Novel of Georgia O’Keeffe

To capture in words an artistry larger than words may sound impossible, but Dawn Tripp has achieved this lofty goal. Her novel, Georgia, not only brings Georgia O’Keeffe’s complicated relationship with Alfred Stieglitz to life but renders masterfully the artist’s complex, interior life as well. Many biographies have told the story of O’Keeffe’s Pygmalion-like association with the famous photographer, and many art critics have described the artist’s own magnificently original achievements. No analysis, however, has crawled inside O’Keeffe’s very soul. This fiction feels consummately real, as if Tripp had been privy to O’Keeffe’s own thoughts and deep emotions.

Georgia follows known facts of O’Keeffe’s life, where she lived, what she was drawing and painting at any given time, how her work was being received, and why her connection with Stieglitz was dictating the progress of her art. Georgia also exposes how the artist wrestled with herself, her passions and her commitment. Of course no one can actually know what was going on in O’Keeffe’s head and heart, but one can surmise. Tripp puts our assumptions down on paper, and then takes the psychology of O’Keeffe one step further, paralleling the bare bones of the artist’s being in tandem with the skeleton of the art being created. Georgia itself resembles an O’Keeffe painting, a flower peeled open, layer by layer, or skull and bones laid bare on desert sand.

The lovers’ passion, the erotic imperatives of their love, plus the forces that ultimately would drive them apart are all present in Georgia. The story begins just as Georgia and Alfred’s affair begins, first as an intellectual flirtation and then as an all-consuming physical conflagration.  Most of the book takes place in New York, either in the city or on Stieglitz’ family property on Lake George. O’Keeffe encounters New Mexico late in the novel, as she fights to free herself from emotional and artistic constraints. Those of us most familiar with her New Mexico paintings will wish she had gone there sooner, but we also will learn the path that took her there, those formative years when Stieglitz was the center of her universe.

Wisely, Tripp chooses to tell O’Keeffe’s story through the artist’s own voice and in the present tense. This lends an immediacy that makes the reader feel as if she were experiencing every event, every emotion, every insight right along with the narrator. Whether O’Keeffe is making love or making art, you feel her desire on every page. You forget you’re reading fiction; she seems so very vulnerable and real. It’s a trap, to believe that fictional representation is true. But Tripp sets a perfect trap in Georgia, and I was snared.

I’m not sure I’ve ever read a better imagined depiction of an artist’s life. A talented writer, Tripp finds imagery that suits O’Keeffe perfectly, language and metaphor that capture her talent, her anguish, her towering achievements.  “I dip my brush into a bowl of water, then swirl it through red paint—that quick thrill of the first mark of color on blank paper, the brush’s point to cut that outer edge, the petals opening, their redness thinned in places, pale sunlight shining through.”  In such a way, O’Keeffe’s life parallels her artistic imagination. As Tripp explains at the outset, the correspondence between O’Keeffe and Stieglitz appeared as she was crafting the third draft of her novel.  So Tripp’s words are her words, not O’Keeffe’s; Georgia’s, not Georgia’s.  But on every page of her novel, I felt the presence of both, Georgia and Georgia, crafted as one.   – Ann Ronald

[A disclaimer here:  I, too, have written about Georgia O’Keeffe (Chapter 12 of GhostWest: Reflections Past and Present, University of Oklahoma Press, 2001).  Although my own focus was on a New Mexico landscape, not New York, and Stieglitz played no part in what I wrote, I perhaps egotistically want to praise Tripp’s novel because it echoes my own personal vision of the artist and her art.] 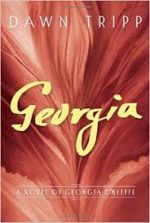 Ann Ronald is a retired English professor from the University of Nevada, Reno. Author of dozens of reviews, she’s also written a number of books about the American West. They include literary studies such as The New West of Edward Abby and Reader of the Purple Sage, cultural studies such as GhostWest and Oh, Give Me a Home, and nature writing such as Earthtones: A Nevada Album. Her latest is a work of fiction, Friendly Fallout 1953. Since retiring, she’s been reading vociferously, so “Bookin’ With Sunny” is giving her a wonderful opportunity to share thoughts about her favorite new discoveries.
More from this reviewer
PrevPacific
Thomas MurphyNext